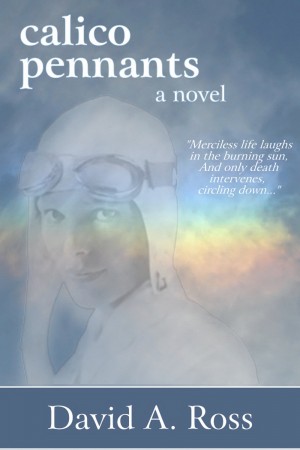 By David A. Ross
Rated 4.33/5 based on 3 reviews
A weekend sailor shipwrecked in the South Seas eventually discovers the island's only other human inhabitant - a woman who bears an uncanny resemblance to 1930s lost flying ace Amelia Earhart. More
Recently divorced and made redundant from his job, Julian Crosby needs a break from reality. That’s why he’s gone to Hawaii…

If his personal circumstances had been different—if he were simply on a two-week vacation in Maui with his now former wife—then he surely would have laughed and said “no” to the outrageous offer from the funny-looking Hawaiian wearing a loud tropical shirt with an equally loud, not to mention obnoxious, blue and yellow parrot named Buenaventura perched upon his shoulder to buy a rundown boat called Scoundrel.

But that was then and this is now… Or is it?

Meanwhile, sixty years ago, Amelia Earhart is getting ready for her much publicized flight around the world. Is this daring adventure to be her final flight, her swan song? Or is she actually on a reconnaissance mission for President Roosevelt? And what does her ill-fated flight have to do with Julian, his innocent Hawaiian holiday and his newly-acquired boat? As Buenaventura reveals, “Only time will tell” as their two worlds unexpectedly and impossibly collide.

Reviews of Calico Pennants by David A. Ross

I looked at the cover to this book and then read the description and then put it away. I recently pulled it back out and decided to give it a go. Honestly? I thought I'd get through the first chapter or two and toss it. Man, I read it nearly one sitting! This was absolutely fabulous! It's more of a historical fiction, but there are two parallel stories going and they meet... I can't say more without giving it away, but I hope the author will rewrite the description as it doesn't do it justice at all!

The writing jumps off the page, I was in that cockpit, driving that plane. I even got a little queasy. No really. Okay, maybe not. But I was totally driving the boat and following along with all of the characters. What a fabulous talent this guy has. At one point I even gasped out loud. Honestly, this is some of the best "in the moment" writing I've read in a very long time.

I lived in Hawaii for several years and this brought back so many of the sights, sounds and smells. Either the author has been there or he's done some serious research into it, which really makes me appreciate his writing even more. I also get the feeling he's done a lot of research on Earhart as well, he had to have - either that or he has be totally snowed, because I'd swear I was reading a really good biography in some parts.

This is a great book for people who like the story of Amelia Earhart or just like a really good action book. I want to say more, but I can't without spoiling it for you... just read it. Trust me.

This is, in many respects, a 'literary' novel rather than a 'mainstream' novel. Some people will like this novel a lot. But the pacing is leisurely throughout. The tension level probably doesn't go above 10% for most of the novel, and the few times it *should* go higher it didn't work for me. The novel reaches its ending without any climax. The point of the novel clearly is the main character's story arc, but we're not shown anything to convince us that he's changed by the end of the book.

Read the preview and see what you think. The rest of the novel is very much in the same style.


If you happen to read while standing up, sit down. If you read while sitting down, find something and hang on! David A. Ross's novel, "Calico Pennants" starts out setting you up for a nice, relaxing read about a man named Julian who takes a vacation to Hawaii. Next, he buys a big boat and next...well, if you think this reviewer is going to tell you anymore about the plot, click the Delete button.

David A. Ross is definitely not new to writing. This author has been around the literary block a time or two and knows how to write a
page-turner. When I began the read, I thought I would make it to the end of Part I and come back to it later. Well, it's much, much later and I couldn't stop until the last period appeared at the end of the last sentence! Several times I thought I had things figured out. More than several times I realized I did not. Books that pick you up and have the power to carry you on adventures is my kind of book. "Calico Pennants" is my kind of book.

A novice sailor with a new boat on his hands takes a weekend trip to get the hang of being a ship's captain. He loses his anchor (well, the boat does), the engine won't start and he drifts from Hawaii far out into the South Pacific Ocean. He loses track of time, loses consciousness and winds up with the boat's hull jammed deeply in the sandy beach of a small island very far from Hawaii.

Meanwhile, years and years before in a flashback, Amelia Earhart is making her attempt at circling the globe and her plane goes down in...yes, somewhere in the South Pacific Ocean...yet, when Julian finally awakes and realizes he is shipwrecked, he is aware of a plane's sputtering, gasping-for-gas sound above him. He follows the sound to where he assumes the crash to be and find... nothing! Time zones are in conflict here but you must keep reading for it only gets better and you'll have to decide how Earhart influences Julian. Strange? Read on.

David A. Ross describes the surroundings on this tiny atoll vividly and precisely and you can almost hear the coconuts hitting the sand and the Trade Winds blowing through the palm fronds. It's interesting what this author does with the different way things look in varying lighting.

The comic relief is wondrously carried out by a very talented, verbal parrot. He and Julian have made this trip together and toward the end of the book they both share something that draws them very close together. The bird takes on human traits and becomes one of the strong characters in the book.

You must read this novel if you want something different from the norm. It's about taking risks, about what it would be like to live in Paradise. It's about finding out who you are and it's most of all, about time, the real main character in this riveting novel.

I gave this novel 5 stars for brilliant writing and creativity at its best!