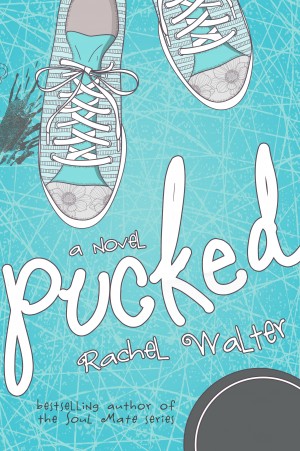 Riley Silk, captain of the Warriors Ice Hockey team at Dalesburg High, doesn’t think life can be lived if love is present. If there’s two things in life he knows to be true, it’s that love causes pain and hockey is his ticket to a better life. He’s worked hard to maintain his Frozen Silk reputation in order to stay focused on his duties and goals.

Audrey Jacobs, the Warriors’ number one fan, believes life can’t be lived without love. She can find love and beauty in the muddiest of situations. Her best friend, Riley, is under a lot of stress at home, so she does her best to brighten his mood whenever she can.

When lines cross and blur, they struggle to keep control of the simplicity their friendship once held. With Audrey’s outlook on life usually surrounded by light, the growing darkness of her doubts and insecurities threaten to deflect her toward the wrong path.

Can she find her true self before her world burns around her? When truths become lies, can Riley find the strength to fight his way through his own personal darkness that clings to his mind and soul? Can he win this face-off that life has dropped in his zone, or will fate take him out of the game completely?

Who keeps the puck?

Rachel Walter is a wife and mother first and a coffee-addicted, chuck-wearing, hockey-watching, snark-spewing author second. She primarily writes Young Adult, but enjoys challenging herself in other genres, like Adult Contemporary. In 2012, Rachel began writing her first novel, True Connection, which she published in 2013. True Connection was re-released in 2014 as part of a boxed set, Pandora, which landed on USA Today’s Best Seller list. When she’s not writing or making images for her Instagram feature, #authorslog, she can be found doing almost anything in south central Pennsylvania, where she lives, to avoid washing dishes.

Reviews of Pucked by Rachel Walter

You have subscribed to alerts for Rachel Walter.

You have been added to Rachel Walter's favorite list.

You can also sign-up to receive email notifications whenever Rachel Walter releases a new book.