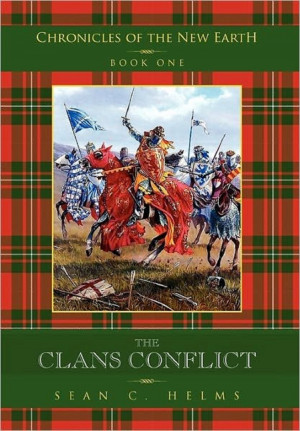 By Sean C. Helms
Rated 4.75/5 based on 4 reviews
The power struggle for the vacant throne of Scotland escalated what had been a blood feud into open civil war as Gregor, chief of Clan Gregor found himself forced with the duty of kingship, whether he wanted it or not! It would be no easy task as enemies rose up against him, particularly the powerful Duke of Argyll, who would do everything possible to see that the crown never sat upon his head! More
The king is dead, long live the king! With those fateful words Scotland would never be the same again. For Gregor MacGregor, the proud chief of Clan Gregor, whom had already found himself amidst a heated border struggle with the rival Clan Campbell, those words were all the more dire. When the ill news of King William's death, along with that of his heir, Prince David, reached Gregor's home at Glenorchy the chief was stunned to realize he had been proclaimed king in Edinburgh. Married to the late king's eldest daughter he suddenly found himself thrust into a role he had neither sought nor wanted, but he was a man born to honour and duty. The task of securing the throne would not be easy as his enemies gathered under the banner of Domeric Campbell, Duke of Argyll, and would do everything in their power to see that the crown never sat upon his head!

Sean Helms is the author of The Clans Conflict, a work that he started many years ago while still in the U. S. Army and stationed at Fort Ord, California. In a mostly empty barracks at Christmas in 1984, and with nothing better to do to take his mind away from the loneliness he felt at being so far away from family for the first time, he began the first hand written draft of his first novel. Untrained in creative writing he forged ahead with the project, his only teachers being those of whom he had read so many fine books. He believed if they could write entertaining stories then he could as well; everyone has to start somewhere, right? He had always been blessed with a vivid and fertile imagination and he began putting it to good use. The novel ended with 256 hand written pages.
By 1993, Sean had finished the second draft of his novel, this time using a word processing typewriter, which was much easier on the hand! He knew it was still a work in progress, although he allowed a select few to read the manuscript. The Clans Conflict sat for several years, all but forgotten, as he began other projects including a sequel to his first novel as well as a novel pertaining to the Jacobites of Scottish history and their charismatic leader, Bonny Prince Charlie.
In 2010 the creative juices again began to flow and now, armed with an wonderful and sleek, new computer, he returned to writing with a gusto. He bent his mind to editing and writing the final draft of his original novel which ended up growing in volume despite all of the revisions he had undertaken, thanks to the input of those whom he had asked to read the previous draft. He is recently finished the sequel to The Clans Conflict, which entitled: The Lord-Protector's War.
Still an avid reader of fantasy, Sean also enjoys submerging himself in works of history, particularly Scottish and Celtic history. Having accumulating a substantial trove of books, many of them read more than once, he has laden bookcases covering much of the walls of his home like a personal library.
Sean lives alone and reads about fantastical worlds of knights, elves, and dwarves when not busy writing within those worlds of his own creation.
Sean is blessed by two grown daughters, a grand daughter; he has two terrific brothers he considers his best friends and great parents that know all his quirks and still love him despite it all.
He lives in rural southeastern Ohio and attends the local Baptist church which much of his family and relatives have gone to all their lives. Proud of his predominately Scottish ancestry, which shades his writing, Sean believes the close knit relationships with his family and kin, and his Christian upbringing have given him the life he has today, while giving all the glory and thanks for whatever talents he has been blessed with to God and His Son, the Savior of the world.
He has one request of those who read his book: and that is to please leave a review of it once you've finished to let others know what you thought of it! Thanks and happy reading!

Although I'm still new to this site for finding e-books to read, I've found that there are some pretty good authors here and Sean C. Helms is the best I've read so far.
The Clans Conflict is a thoroughly good read; action-packed throughout, it's was hard to stop reading it once I got started. The battle sequences were first rate and the Scottish characters quite memorable.
I've read books where one has to labor through the first chapter or two before it was able to keep my interest, but this novel certainly didn't have that problem. This story leaps forward from the first page of the first chapter and never relents. Well-written from beginning to end, the author makes me what to travel to Scotland and see the real places he has described.
The ending won't leave you dissatisfied either because there's a twist that I never saw coming.
As this was called book one, I hope the next volume is available soon so I can continue reading the adventures of King Gregor and Lord Sean in that turbulent land.

As anyone who knows me will tell you: I love Scotland and her culture. This novel has it in aces!
When I started to read this book I found that I couldn't put it down; the fast pace of the adventure taking place kept me riveted to the screen. Although this book supposed to be a historical fantasy, it's really set in the future following a third world war. But don't let that put you off because it's not science fiction at all. Once you finish the prelude it's like you've stepped back in time to the European middle ages.
Based in the highlands of Scotland, the feuding clans come to life with rich characters that draw the reader into their world; some you'll love and some you'll hate, but many call forth an emotional response with their varying personalities. I know that I certainly empathized with Duncan MacSean in particular.
Rival clans band together as their leaders (chiefs) contend for the vacant throne of Scotland, and the warfare at times can be quite bloody and brutal.
I also applaude the author's attention to detail, especially with the geography in which the story unfolds ( I googled maps of Scotland and was pleased to find these details accurate).
There are only two things I'd suggest to his writing: 1. Add some valid females to the ongoing story so that more of an audience can relate, 2. Add a glossary so that those less knowledgeable about Scotland and Celtic myth will more easily understand some of the terms used and those background characters from that mythos.
I found The Clans Conflict a thoroughly good read and encourage others to give this 'undiscovered' author a shot, you won't regret it.
I've found that the author is busy writing the next installment of this ongoing trilogy- he has a website that offers a little about what we can expect in book two. Hopefully it's finished soon, as I'm interested to read what happens with the surviving characters.

The title and cover of this book first drew my attention, so I decided to give it a try. i'm glad that I did! The author clearly did some research on his subject matter. I enjoyed the dialogue and the fast-paced action throughout. Boody scenes of clan warfare were exciting to read and felt like I was right there with the characters. I especially liked Duncan MacSean, who is one of the main characters, and empathized with him as well.
Give the book a try and you'll enjoy it, I did. I plan on purchasing a hard copy from xlibris to keep in my library at home.

This is a well written, fast paced book that's full of adventure set in Scotland amongst warring highland clans. The MacGregors and Campbells, long-time rivals, are involved in a border war that suddenly escalates when Lord Gregor finds himself declared king when King Willaim and his only son tragically die on the same day. The Duke of Argyll, Domeric Campbell, vows to never bow the knee to his hated enemy and decides to try and take the crown for himself. Civil war ensues and many other Scottish clans join the conflict on both sides.
This book is for anyone interested in Scotland and her clans, enjoys medievel warfare, and plenty of bloody scenes in graphic battle.
The dialogue is highly enjoyable as well, and you'll find yourself speaking as if you are one of them.
Read the book and you'll be eagerly waiting for the next installment of this action packed trilogy!

You have subscribed to alerts for Sean C. Helms.

You have been added to Sean C. Helms's favorite list.

You can also sign-up to receive email notifications whenever Sean C. Helms releases a new book.