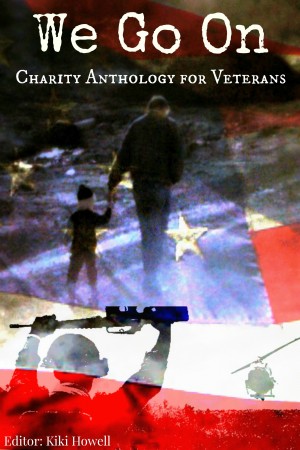 We Go On: Charity Anthology for Veterans

To all who have served and to all of those who love them, we offer our undying gratitude because it is all we truly have to give you for your sacrifices, told and untold. So, we give what we can to honor you, to say thank you, and to, in some small way, give back. Although it could never be enough, a million thanks or a million dollars, we pray we can help some of the many who have given so much, so selflessly, and then suffered even as they fought another battle, the battle to go on…

Ever since she was young, Kiki Howell has loved to listen to a well-woven tale with real characters, inspired plots, and delightful resolutions. Kiki could spend hours lost in a book, and soon she knew that creating lives, loves, and losses with just words had to be the greatest thing that she could do. To that end, she pursued her study of literature and writing, earning a bachelor’s degree in English. She then followed in a Master’s program in Creative Writing. She has now had over forty stories published between eleven different publishers. She could not be more thrilled or grateful to see her creations polished and out in the real world.

In May, 2011, Kiki was chosen as an Ohioana Book Festival author for her novel, Torn Asunder. She's also had three flash fiction stories win writing contests. In the fall of 2013, her novel, Hidden Salem, made the Amazon Top 100 Bestsellers Lists in Paranormal, Suspense and Ghosts; and in the fall of 2014, her novel. What Lies Within Us, made the Amazon Top 100 Best Sellers Lists in Gothic Fiction and Occult Horror.

Releasing March 9th, 2015, Kiki coordinated and edited her first charity anthology, We Go On, with all proceeds going to veteran's charities.