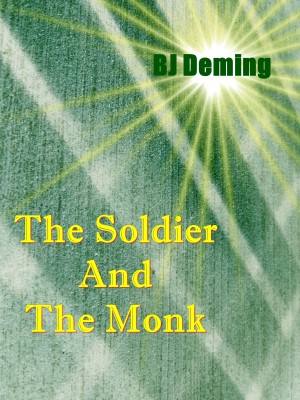 The Soldier And The Monk

By BJ Deming
In November 1967, a traditional Buddhist monk living in South Vietnam’s Central Highlands, faces a moral dilemma after finding a wounded American soldier. Complicating the picture are an angry North Vietnamese Army officer and the presence of nine-year-old Vo, a Down-syndrome child who is the monk’s ward. More
In South Vietnam’s Central Highlands, a traditional Buddhist monk finds a wounded American soldier.

Should the monk risk helping the badly wounded GI or should he save himself by turning the soldier over to the local Communists? Complicating the picture is the presence of nine-year-old Vo, a Down syndrome child who is the monk’s ward.

When the monk decides to help the injured man, he must then lead the child and the soldier through the jungle, knowing that his choice may get him executed and his monastery and village ruined. Even if they get away, he and his ward must leave their homeland forever.

B. J. Deming was born in New England, but her favorite places in the US are the Alabama and Oregon. Besides fiction, she enjoys blogging about Earth Science and the American Civil War. Right now she is working on a nonfiction book about the first cat (due in the summer of 2015), as well as her next Jack Murphy book, "The Birchfield Murders" (due in the fall of 2016).

Reviews of The Soldier And The Monk by BJ Deming

You have subscribed to alerts for BJ Deming.

You have been added to BJ Deming's favorite list.

You can also sign-up to receive email notifications whenever BJ Deming releases a new book.