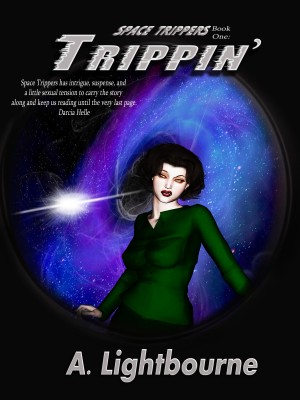 By A. Lightbourne
Rated 4.67/5 based on 3 reviews
Exiled from her home planet for allegedly selling weapons to the humans,Engineer Valesque lives undercover in hostile territory.
Soon her world falls apart as her unfinished ship is commandeered for war duty by the enemy of her people and subsequently winds up in uncharted space.
With only a shy genius, a flirty pilot and an airhead android for help can she figure out what is happening in time? More
The adventure begins when Valesque's unfinished ship is commandeered by the enemy, with her on board! To make matters worse she is getting blamed when her long lost device is found on the ship and strands them in uncharted space. Can she figure out what is happening in time? Or will they all be destroyed by her own hand?

Valesque burst through the doors of the room and into a chaotic mess of people running and shouting amid ship systems starting to go haywire. Lights began to flicker; control panels began to flash off and on randomly
as the powerful drumming of the engines became louder and louder.

The crew was panicked, a Viper ship was about to fire on them and their own ship was suddenly out of control, their destruction seemed imminent. Valesque heard the engines switch as her ship shuddered, feeling as if it were
preparing for an abrupt jump, just as the other vessel fired off its weapons. Either way, there was only one thing to do.
"Brace yourself!"

Valesque Rhaugh is a Virrilian Engineer, banished from her home planet for allegedly selling weapons to the humans. She lives a quiet life, moving from place to place and constructing new gadgets. Lately she has been living undercover in hostile Earthian territory, constructing her latest project; a state-of-the-art scientific exploration vessel.

The corrupt Earthian organization, the I.P.A. has sought control of her inventions before, but she had always turned them down flat. One determined General has now set his sights on her unfinished ship. In one fateful day he has her unarmed vessel taken over and ordered out for war duty, against her people! Worse yet, they shanghaied her as part of the crew!

When she wakes up, three days after launch, kidnapped on her own vessel, her nightmare has only just begun. Soon she discovers a sinister secret as her long lost device, the Space Tripper activates and sends them all hurtling into the unknown.

When the crew finds themselves stranded in uncharted space all fingers point at her. Can she figure out what is happening in time? Or will they all be destroyed by her own hand?

Our short-tempered heroine is reluctantly befriended by a very flirty pilot, a shy young genius, an air headed android and a suspicious alien girl found drifting in space.

But can these people be trusted? With everyone's lives on the line can she figure out who to trust, who not to and how to get them all home?

Find out in the Space Trippers series, where espionage, love triangles and hidden identities abound. As well as a generous smattering of humor as tempers and personalities collide!

A fun, light series. Each book in the series follows the next in this episodic adventure. Each stop on the continuing journey delves a little deeper into the pasts, feelings and motives of each character as the entire story begins to unfold.

SciFi/Fantasy writer. My writing style is light and littered with humor.

Space Trippers book trailer
Video Book Trailer for the Space Trippers series by A. Lightbourne. Space trippers can be bought from any book retailer in paperback or digital format 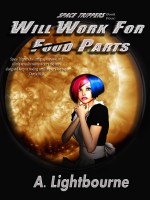 Space Trippers is a fun read, but this adventure is no romp for the main character, Valesque, who has to deal with a colorful cast of characters when she gets her ship, her self, and her invention stolen, and then gets into real trouble. The book hints that Valesque’s culture not only has very different motivations than human cultures, but that aliens might be responsible for Earth’s vampire legends; I hope we get to find out more in the subsequent books in the series. The story is a great blend of action and humor, and I look forward to reading the next Space Trippers book!

(reviewed 14 days after purchase)
Darcia Helle reviewed on May 1, 2010

This story takes place on the spaceship, with a cast of characters from various planets. Lightbourne does a masterful job in showing us her vision of this ship. The details weave into the story effortlessly, so that we feel as if we are standing on the Magellan along with its crew in mid-flight. The characters are each unique, pulling us into their world as we get to know them. Space Trippers has intrigue, suspense, and a little sexual tension to carry the story along and keep us reading until the very last page.

I can see this book being a huge hit on the big screen!

Space Trippers is space opera at its finest.

The book takes its catchy name from a device that was invented for the specific purpose of transporting ones enemies unharmed through a space warp to some uncharted part of the universe without the possibility of them ever returning to their original coordinates. This gives new meaning to the old adage: Out of sight, out of mind!

Aurora Lightbourne is a PC Tech with an excellent knowledge of electronic devices and computers which she uses to infuse uncanny life into her creations. Her style is very easy to read and has a nice flow to it. She certainly has a good command of the English language and knows how to build up the necessary intrigue and drama to keep the reader turning the pages.

Being a female author, Lightbourne has added a number of strong female characters to her narrative: The by-the-book military Captain C. Fairbanks and the book’s main character Valesque Rhaugh - a strong-willed, independent thinking, no-nonsense taking female Virrilian. One might even surmise that she is an extension of the author herself except for her physical appearance which is very much vampirish (Pale skinned and fanged). Valesque is a brilliant scientist who has constructed a state-of-the-art spaceship named the I.S.A. Magellan; she is also, although regretful of it, the inventor of the space tripping device.

The narrative starts off by introducing us to the environment of the Space Trippers viz. the characters, the technology and the politics that have led to the raging intergalactic war that has caused bitterness between Valasque’s race and the humans who are now known as Earthians. An unfortunate (or perhaps fortunate) chain of events have forced her to flee from her own people and reluctantly assist the Earthian controlled Intergalactic Planetary Alliance (I.P.A.) when they illegally commandeer her ship; even changing the name to the I.P.A. Vortex. One can compare this to a roller coaster ride - a slow build up as we ascend to the top but then from the end of chapter four onwards it’s non-stop action and adventure all the way to the last enthralling page that will have you panting for more in Book 2.

The characters are all well-developed, and there are a number of scenes rife with sexual tension and some with humour that even had me laughing out loud.

If you like stuff like Firefly, Ice Pirates or, and especially, the Star Trek series Voyager, then Space Trippers is definitely a must-read.

Given enough time, I expect that Lightbourne’s Vortex will become as well-known as Lucas’ Millennium Falcon or even Roddenberry’s Enterprise.

You have subscribed to alerts for A. Lightbourne.

You have been added to A. Lightbourne's favorite list.

You can also sign-up to receive email notifications whenever A. Lightbourne releases a new book.