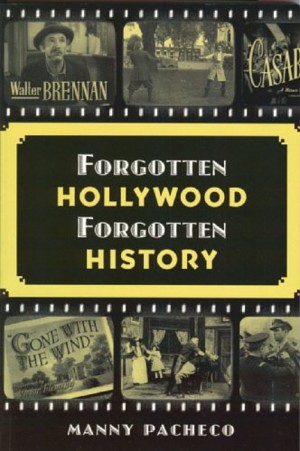 By Manny Pacheco
Forgotten Hollywood Forgotten History tells America's story through the eyes of character actors during Hollywood's Golden Age including Claude Rains, Basil Rathbone, Walter Brennan, and Van Heflin. More
Vision4Media Inc., a Brea, CA-based film production company, just signed a deal to develop a documentary based on Pacheco’s work. V4M co-founder David Bojorquez, who will direct the film, said. “What makes this media property compelling for us are the stories behind some of the most beloved movies and cinematic legends from Hollywood’s studio era, and how accounts reflect societal issues surprisingly relevant and entertaining today.”

The author’s work has received literary recognition from the World Book Awards, USA Book News, Premier Books, Book&Authors.net, and the Hollywood Book Festival over the past year.

The libraries of the Academy of Motion Picture Arts and Sciences, the American Film Institute, the Screen Actors Guild Foundation, and the Writers Guild Foundation have also added the honored paperback to their prestigious shelves. The book can also be found at the Hollywood Heritage Museum, and the Paley Center for Media in Beverly Hills.

Manny Pacheco is a Southern California radio and television personality. He has been a member of the Screen Actors Guild for 40-years.

His paperback can be found in the prestigious libraries of the Academy of Motion Picture Arts & Sciences, the American Film Institute, the SAG Foundation, and the Writers Guild Foundation. You can also find his work at the Hollywood Heritage Museum and the Niles Essanay Museum in Fremont, CA.

You have subscribed to alerts for Manny Pacheco.

You have been added to Manny Pacheco's favorite list.

You can also sign-up to receive email notifications whenever Manny Pacheco releases a new book.