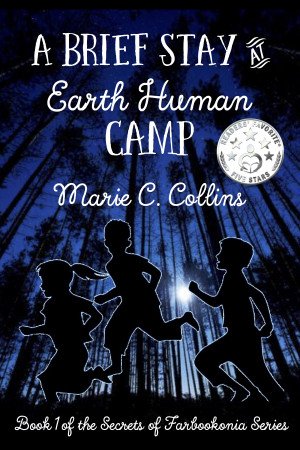 A Brief Stay at Earth Human Camp: Book 1 of the Secrets of Farbookonia Series

By Marie C. Collins
Once you find out your mother is an alien, what ISN'T possible?!

Right after Anne & Atticus learn their mother is a Farbookonian human, not an Earth human—making them half-alien—they’re whisked off to sleep-away camp for protection. They try to fit in, but their unpredictable “talents” nearly give them away. When things turn ominous, can the things that make them different help them survive? More
Once you find out your mother is an alien, what ISN'T possible?!

That’s what 12-year-old Anne and 10-year-old Atticus Reade want to know. Minutes after learning their mother is a Farbookonian human, not an Earth human — making them half-alien — they’re whisked off to sleep-away camp in New Jersey for protection, each with a tiny Globot on one shoulder.

They do their best to fit in at camp, but their sheltered existence in the Midwest didn’t prepare them for this. Everything is new to them, and at every step, their unpredictable Farbookonian talents threaten to give them away.

Just as they settle in, a broadcast on the Rec Hall TV shakes things up, and they begin to see what’s truly strange about camp. As they race to solve a mystery involving ghost stories, quirky campers, a bizarre camp director, and a secret connection they share with their friends, only one thing is clear: They’re not safe.

Will the things that make Anne and Atticus different help them survive?

Is this book for me?

If you like stories that transform the ordinary into the extraordinary ... if you like characters that remind you of your friends ... if you like mysteries that keep you guessing until the final pages ... this book is for you.

"[T]he novel has the feel of the work of Dr. Seuss or Roald Dahl. The similarities really are impressive ... I commend Marie Collins on her spectacular work on this novel, one which makes you feel the stormclouds gather as you prepare for the storm."
--TeenBookReviewer, bit.ly/1ceeXZY

"What can I say ... this author knows how to write a page turner for young teens! This is a book that pulls you in by the characters and a plot that keeps giving."
--Purple Pen Book Reviews, bit.ly/1SV4p1Q

"A Brief Stay at Earth Human Camp will pull you into a world of children and adventure! ... Alien children kick butt!"
--City Life Reader, bit.ly/1dqC0Aq

"This was such a fantastic, FANTASTIC book! I enjoyed every sentence from start to finish ... I found it almost impossible to look away from my screen ... I would love to read more about these characters and the Farbookonians!"
--Rachael, Elementaread (Spoiler Alert), bit.ly/1ghQtQP

"I enjoyed this page turner of a book. ... a great all-around story. Good for anyone wanting an adventure story, perfect for sleep away camp!"
--Sunshy Book Reviews, bit.ly/1GIE3Yd

"This is a story I think kids, pre-teens and teens will enjoy. ... The characters are great!"
--The Book Swap, bit.ly/1NjAI6F

"This is a wonderful book ... a good summer read for readers who like strong lead kid character[s] that tell a story of friendship!"
--A Cup of Tea and a Book, bit.ly/1NjG7e1

Marie C. Collins lives in Lambertville, New Jersey (USA), with her two dogs, George Eliot and Henry James, who — in spite of their snoring and a tendency to sniff horrifying things — are very good company (and in return, willingly endure Marie’s insistence that they LOVE being kissed on their snouts).

Marie holds a bachelor’s degree in English and Journalism from Douglas College at Rutgers University and a master’s degree in English Literature from Temple University. She has held sundry jobs throughout her life, like caregiver, cook, waitress, newspaper reporter, and even a brief, misguided stint as a ballroom dance teacher. However, for most of her adult life she has written for hire, usually on topics related to education, as writing is the thing she likes to do best.

Marie has a daughter she adores, who is now a doctor in Seattle.

Throughout Marie’s life, she has at times felt like an alien — mostly because she was extremely shy and didn’t react to things the way other people did. When she decided it was time to try to write a novel, she found herself wondering what it would be like to actually be an alien — then it struck her that that might be a good place to start. But since she’s also intrigued by the way cultures blend to make each of us feel a bit “different,” she decided her aliens should be half Earth human as well.

Marie is currently writing the next book in her Secrets of Farbookonia series: The Quest for Normal.

Reviews of A Brief Stay at Earth Human Camp: Book 1 of the Secrets of Farbookonia Series by Marie C. Collins

You have subscribed to alerts for Marie C. Collins.

You have been added to Marie C. Collins's favorite list.

You can also sign-up to receive email notifications whenever Marie C. Collins releases a new book.