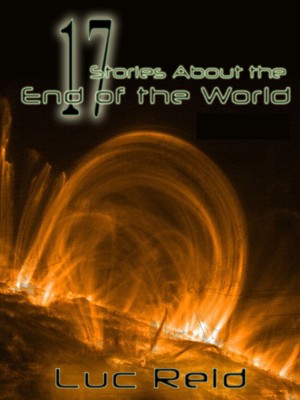 17 Stories About the End of the World

By Luc Reid
Rated 2.50/5 based on 2 reviews
17 short (sometimes very, very short) stories about the end of the world, by gods, war, pollution, alien invasion, robot insurrection, and passing away gently when time has run out.

Luc Reid is a Writers of the Future winner whose fiction and nonfiction have also appeared in Clarkesworld, Strange Horizons, Abyss & Apex, and other venues. He's the founder of the Codex online neo-pro writers' group at www.codexwriters.com; author of Talk the Talk: The Slang of 65 American Subcultures (Writers Digest Books, 2006) at www.subculturetalk.com; a founding member of flash fiction group The Daily Cabal, on which site well over a hundred of his stories have appeared (www.dailycabal.com); a former radio commentator for Jacksonville, Florida NPR affiliate WJCT; and a columnist for Futurismic (www.futurismic.com) with his Brain Hacks for Writers series.

Reid's writing Web site is www.lucreid.com. He blogs sporadically about writing at reidwrite.livejournal.com and posts five articles a week on tactics and insights for self-motivation at www.willpowerengine.com . His eBook The Writing Engine: A Practical Guide to Writing Motivation, is available for PDF download on his site (free) as well as for Kindle. You can find him on Twitter @lucreid.

Reid's latest book is Bam! 172 Hellaciously Quick Stories, initially available for Kindle only. Bam! follows normal people in strange and impossible situation, with stories of Cinderella's divorce, the Monkey God, the Robot Insurrection, the world ending at least 8 different ways, and much more.

This is a quick little collection of flash fiction about the world ending. I found some of the stories a little lacking in detail and hard to connect to.

I enjoyed the story On That Last Afternoon the most, which, ironically, is the only story where the world does not actually end. This story had a realism and humour that made it stand out from the others.

You have subscribed to alerts for Luc Reid.

You have been added to Luc Reid's favorite list.

You can also sign-up to receive email notifications whenever Luc Reid releases a new book.