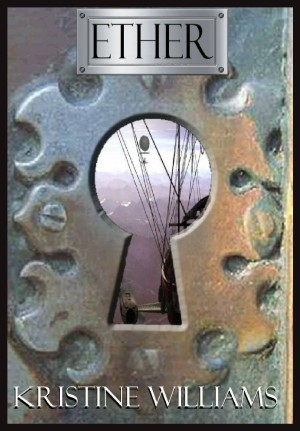 By Kristine Williams
Rated 4.40/5 based on 5 reviews
Daniel Harper found a strange key on his uncle's old farm. When he tried it on the cellar door, he found himself in the path of an oncoming car on a dark city street.

He's just stepped into Ether, a world of steam powered cars and wooden ships that sail the skies. The key to going home is the key that brought him there, but he left that one back in the cellar door.
Available ebook formats: epub mobi pdf rtf lrf pdb txt html
First 25% Sample: epub mobi (Kindle) lrf more Online Reader
pdb
Price: $0.99 USD
Buy Add to Library Give as a Gift
How gifting works
Create Widget
Tags: adventure fantasy steam punk
About Kristine Williams

Born and raised in the Pacific Northwest, I'm an avid reader, writer, and government employee with a degree in Veterinary science (go figure). I write Science Fiction but occasionally dabble in Fantasy, and have been known to explore Mainstream now and again.

Reviews of Ether by Kristine Williams

I enjoyed this story quite a bit. I have to really like a book to continue reading despite so many errors. Ms. Williams: Please look up the homonyms. You mixed up passed and past several times.

The bad stuff out of the way, this is an inventive plot and well-written (ignoring typos and not-quite-right words). The MC, Daniel, was likeable and reacted as a real person might in the strange situations he finds himself in the world of Ether. Matter of fact, all of the main characters were well-drawn and had distinctive voices, something that is often lost with secondary characters.

Despite the typos, I'd still recommend the book as a worthy edition to the non-epic fantasy genre.

As Dickens once said; "These are the best of books, these are the worst of books". (He didn't say thaaaat, did he?) This little nugget falls onto my "best of books" shelf. While the premise for her book is not completely original (see "the Lost Room", a TV mini-series from 2006) Kristine does enough with it that I didn't care. (And it's always possible that she had been writing this book since before 2006).

One of the first things that make me put a book down, is bad dialog. This author has developed very good dialog writing skills. She keeps her story moving nicely (you don't find yourself cringing, like in some books where you can become thoroughly convinced that the conversation there-in can't be coming from real humans).

My only (all-be-it very mild) complaint is that I would like a little more gadgetry in a "SteamPunk" story (although there was a hint at a budding romance). In this case, I will let it slide.

So, do I give four stars, or five? I was thinking four and a half, but, since there is no button for that, I'll give the benefit of the doubt--- Five.

I see this author has other offerings. I will definitely try one, or two, or........

Pure fantasy with a nod to steampunk (as noted by Paul). I agree with Karen that the world is not quite as well developed as the characters. Still the descriptions of some of the hazards are imaginative. First half dwells on the differences between the two worlds and the second half on quick moving action.

I enjoyed this book especially as it was free. The story has an interesting background which opens itself to revisits to the world of Ether, hopefully to answer the sort of questions Mickey330 mentions as well as others such as where did the keys come from, was there an "original" discoverer of Ether?
It seems to me that the story just gives a "nod" to the steam punk genre and although it didn`t detract from the story for me I think the story would benefit from this facet of the book being expanded and developed.
I found there were still some basic questions unanswered such as, if the journey North and South is so difficult and there is no way of communicating between the two, how are edicts and rulings passed from the king in the North to the rest of the country? How do they stay in control?
How did the North manage to claim the country to the South?
As Karen mentions I did feel that the world of Ether was a little 2 dimensional, it lacks depth. The way the world is laid out with it`s all surrounding mountains and dangers, seems to be a just way of enabling concepts like the black fog and the swamp to be the limiting factors to travel that they are. Having said that the dangers that travellers face are very well conceived and interesting, I found the swamp to be particularly spooky.
All in all a very entertaining read, it would be a great shame if Kristine didn`t offer us a return to Ether where more flesh could be put on the already fairly fleshy bones of this interesting world.

I got this book during Read an E-Book Week (March 2010). I took this long to write a review because, well, I got a LOT of books that week - and I just got to/finished this one.

I don't have the training to fully describe why I like this book (and, truthfully, I don't have the urge). I just know that I enjoyed reading about the world of Ether and the main characters. Simply put, it was a story that kept my attention from beginning to end; it was a very entertaining read.

Out of the 50+ books I downloaded [and read] during e-book week, this is the second one I am going to keep on my permanent e-book shelf - and recommend to others. In fact, I am stopping here to write the review on my way to my shopping cart to buy more books from this author.

In fact, Kristine, if you please: More stories set in the world of Ether would be nice. As in - what exactly is going on in the black fog? How far DOES the maze go (and what are the properties of the fungus)? IS there anything beyond the mountains surrounding the known civilization? I'd being willing to go along with you as you answer these questions...

Lastly, Kristine, thanks for making this book available for free download. A very nice gift - and one I'd highly recommend people read.

You have subscribed to alerts for Kristine Williams.

You have been added to Kristine Williams's favorite list.

You can also sign-up to receive email notifications whenever Kristine Williams releases a new book.