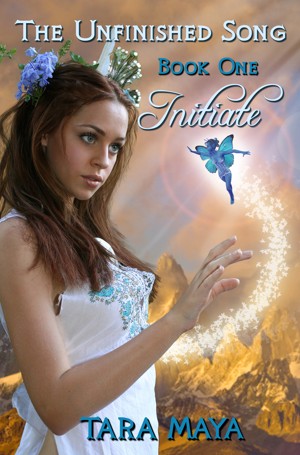 By Misque Press
Rated 4.25/5 based on 8 reviews
Dindi longs to become a Tavaedi, one of the powerful warrior-dancers who wield magic. No one of her kind has ever succeeded.

But Dindi has a plan. More
DEADLY INITIATION

Dindi can't do anything right, maybe because she spends more time dancing with pixies than doing her chores. Her clan hopes to marry her off and settle her down, but she dreams of becoming a Tavaedi, one of the powerful warrior-dancers whose secret magics are revealed only to those who pass a mysterious Test during the Initiation ceremony. The problem? No-one in Dindi's clan has ever passed the Test. Her grandmother died trying. But Dindi has a plan.

Kavio is the most powerful warrior-dancer in Faearth, but when he is exiled from the tribehold for a crime he didn't commit, he decides to shed his old life. If roving cannibals and hexers don't kill him first, this is his chance to escape the shadow of his father's wars and his mother's curse. But when he rescues a young Initiate girl, he finds himself drawn into as deadly a plot as any he left behind. He must decide whether to walk away or fight for her... assuming she would even accept the help of an exile.
Download: epub mobi (Kindle) pdf more Online Reader
rtf lrf pdb txt
Price: Free! USD
Add to Library
Create Widget
Tags: shaman paranormal romance fantasy young adult myth fairy tales legend epic fantasy elf fairy dragon fantasy romance fae dancing tribal fantasy fantasy action epic romance tara maya
About Misque Press

Tara Maya has lived in Africa, Europe and Asia. She's pounded sorghum with mortar and pestle in a little clay village where the jungle meets the desert, meditated in a Buddhist monastery in the Himalayas and sailed the Volga river to a secret city that was once the heart of the Soviet space program. This first-hand experience, as well as research into the strange and piquant histories of lost civilizations, inspires her writing. Her terrible housekeeping, however, is entirely the fault of pixies.

Reviews of The Unfinished Song: Initiate by Misque Press

f you like to read about magic and the fae then you'll love this book.

14 year old Dindi loves to dance. She has always dreamed of becoming a Tavaedi and getting to continue dancing. This book takes us along on Dindi's adventure as goes through what is called the initiation, where she is tested and it will be decided if she gets to be one or has to give up her dream forever.

Plenty of ups and down in this book and keep you interested. I know I myself couldn't put it down!

I'm in love with this series. The magic system is very different than what we see in most stories, and I love that. I also like the shifting viewpoints, because if you're not a big fan of the protagonist, you can still enjoy the story. The world as a whole is very well developed, and the characters are varied enough that you can have someone to relate to without being too many to keep track of, which is refreshing after GoT. Also, it has fairies, which is something most good fantasies give up on, and I'm glad this one didn't.
Be warned: book 1 ends in a cliffhanger. I, for one, did not see that coming, but it was a good plot twist.

Dindi dreams of becoming a Tavaedi, a warrior-dancer with magic powers. Only those who pass an Initiation test can join this group and now her turn has come.

For me, this was the worst book I've read this year. The plot, the characters, the writing, EVERYTHING was wrong with this book. I really hated this one.

Dindi is the most useless excuse for a girl that I've ever seen. She is supposed to be 14 but doesn't seem older than about two. She is stupid, useless, and has the common sense of a blade of grass. She spends all her time dancing with the fae and shirking her chores and this causes chaos everywhere she goes. She screws up the simple act of washing her face, screws up the Initiation kidnap for everyone and makes a mess of everything she says and does. I was hoping that somebody would just kill her as becoming a Happy Meal for her tribe would have given her a use at last! The second story arc following the clan exile is no more interesting.

The book is over-descriptive to excess. We get every detail of Dindi's chores, the village, the market place, Dindi's home, the Initiation, the trek etc and it was far too much for me. I don't need to know the colour and shape of everything. Yet the author did not feel the need to explain the important things. She gives names to things ie '..a kraal at the bottom of the hill held aurochsen and horses'...yet does not think to tell the reader what an aurochsen is! The info dumps are long and complicated with words you don't get given the meaning for which leads to a boring and confusing narrative. There were so many tribes and factions each with different names and traits that it leads to more confusion, especially when the story keeps jumping between them all the time. I was totally lost and could not keep track of who was who, and it got to the stage that I didn't actually care anymore.

The book really feels like a fairytale and it was fun to read it. Sometimes it's a bit hard to read because of the different viewpoints but when you know who the characters are, it gets easier.
A great first part of the series.

The world building is fantastic. I've been meaning to write a review for this for a while but it always comes back to this. Tara Maya created a lush and vivid world, full of very human characters, art, music, dance and magic. If any of that sounds interesting to you, read the hell out of this book. Read the whole series. It's engaging, fun and interesting.

I'm not big on fairy tales or hard fantasy and this is both of those but done in a very interesting way. It's not a fairy tale in the way that The Girl Who Circumnavigated Fairyland in a Ship of Her Own Making is, but rather an ancient tribal version of Charles DeLint. The Fairies aren't Tinkerbell, they are wild magic that causes problems for the protagonists but helps them too, a little, kind of. Also, I've never been a fan of dance, which plays a prominent role in this story, but the other aspects of the story were so strong and well written that I enjoyed even the bits I didn't expect to.

Tara Maya is giving a good name to self published e-book authors.

You are seriously missing out if you're looking for a smart read and choose to pass this up.

Initiate is the first book of a new series, The Unfinished Song, by Tara Maya. As such, there are a few things I feel that you should know up front. First, if cliffhangers piss you off, be sure you have the second book, Taboo (which was just recently released), ready to dive into once you're finished Initiate. I wasn't bothered because I pretty much knew what I was getting into right off the bat but the Amazon description doesn't much give the cliffhanger impression to potential readers so I'm just giving you all a heads up.

Also, this is VERY much an Epic Fantasy. While I feel one of the book's strong points is Tara's exceptional dedication to the World Building, I do know that some readers would find it off putting if their not huge culture fanatics. Some people have complained that they were disoriented/confused by the various names and political systems, but I found the seven tribes utterly fascinating and I felt Tara explained them all well enough without ever going into a huge, long, drawn out info dump. Tara also manages to be very lyrical with her prose without it becoming meandering. I always felt rooted in the story.

I liked that Dindi, our heroine, is not only conscious of her differences but embraces them despite insurmountable criticism from her clan. She beats to the tune of her own drums and doesn't give up on her dreams no matter how others might view them. I'm looking forward to seeing how she'll change as a person in the light of the events at the end of Book 1. I have to give it to Tara for being gutsy with her ending. That's all I'll say about that.

While I never got to the point where I "liked" Gwenika, Dindi's friend, I found her relate-able. Her self-sabotage was very interesting in a tragic way.

Kavio, thus far, has the makings of a good hero. I love "lone wolf" heroes. Vindicated, honorable, but rough around the edges.

And yet...I feel my "side-character love" creeping up. Meira, my favorite character (which is to say, the one I found most intriguing) , is the one I can reveal the least about. She almost got my "favorite quote" vote but the one above was simply too deliciously bitter for me to pass up on.

I would recommend this book to Fantasy lovers and lovers of Fairy Tales. And by Fairy Tales, I don't mean those of the watered down Disney variety.

The shifting of viewpoints was a little confusing in the beginning, but it's an engrossing tale set in a fascinating world.

Such a nice book, greatly written, with a captivating story. What's more, it's world is quite refreshing for me, a mix of "tribal" cultures.
The only problem is that it leaves me wanting for more. I now can't wait for the next part.

You have subscribed to alerts for Misque Press.

You have been added to Misque Press's favorite list.

You can also sign-up to receive email notifications whenever Misque Press releases a new book.