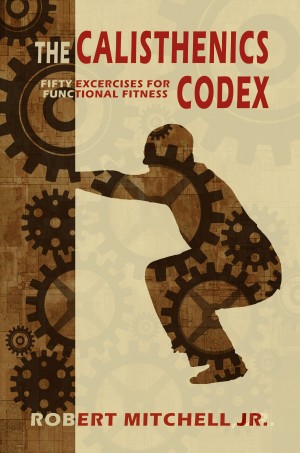 By Robert Mitchell, Jr
"The Calisthenics Codex" features 50 body-weight-only calisthenics, each fully explained, illustrated with photos, and arranged into targeted lists to suit your interests and fitness level. Choose from 12 workout types, select exercises from 26 groupings like "Gym Class Flashback", "Steampunk Nightmare", and "Self Destruct Sequence", and create one of over 2,000,000 possible workouts. More
Centuries old and still going strong, calisthenics remain the most effective and efficient way to get in shape and stay that way. Whether you are a beginner just starting out, a dedicated weekday or weekend warrior craving variety, or a hardcore athlete looking for a fresh perspective or a new challenge, "The Calisthenics Codex" has something for you.

People who know the truth about functional fitness -- from elite military forces to boxers, MMA fighters, models and actors -- rely on calisthenics to realize their goals. Are you sick of not being in the kind of shape you want to be in? All you need to remedy the situation is a copy of "The Calisthenics Codex", fifty square feet of available floor space in your basement, garage, den, or backyard, and a little bit of attitude and determination. What are you waiting for?

Over 2,000,000 possible workouts! "The Calisthenics Codex" features 50 calisthenics, each fully explained, illustrated with photos, and arranged into lists that target your interests and fitness level. Choose one of 12 different workout types and then select exercises from 26 groupings like "Gym Class Flashback", "Steampunk Nightmare", and "Self Destruct Sequence" to create workouts that suit your goals, interests, and fitness level. The possibilities are virtually endless.

Beginners get started right, with easy calisthenics such as Front Planks, Dirty Dogs and Lunges, and learn how to warm up, cool down, and stretch. Advanced players are presented with brutal exercises like Barrel Roll Push-ups, Hindu Squats, and Bodybuilders, and face tough challenges like "Gut Check" and "Death March."

And as an added bonus, you'll find out how to complete any workout and get your name in the Calisthenics Codex Hall of Fame!

No equipment. No gym memberships. No excuses. Download "The Calisthenics Codex" and get started today.

Robert Mitchell is a writer, martial arts expert, and deacon in the Old Catholic tradition from Richmond, VA. A martial artist for over thirty years, he is the founder and first elder of Cabal Fang, an martial art that marries practical self-defense techniques with the wonders of the Western Mysteries. In 2011 he was awarded the rank of Master by the Combat Martial Arts Practitioners Association, and in 2019 became an authorized instructor of Mark Hatmaker's Frontier Rough & Tumble Martial arts program.

On the subject of martial arts and related topics he has penned "Cabal Fang: Complete Study Course from Querent to Elder" and "The Calisthenics Codex" which has been in Smashword's Top 10 fitness books since its publication in 2015. His fiction works include the novels "Chatters on the Tide," "Ghilan" and "The 14th Mansion," as well as numerous poems, ‘zines, comic books, and short pieces. His work has appeared in the Journal of Asian Martial Arts, Hulltown 360 Literary Journal, and more.