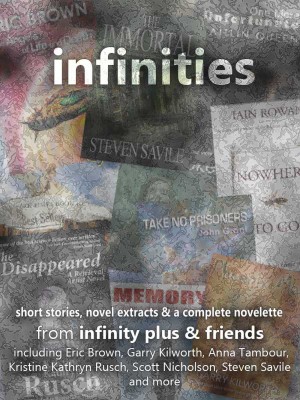 By Infinity Plus
A FREE sampler of short stories, novel extracts and a complete novelette from infinity plus and friends:

infinity plus is a science fiction, fantasy and horror showcase that ran from 1997 to 2007 and remains online as an archive.

The infinity plus ebook imprint launched in December 2010 with titles from Eric Brown, Kaitlin Queen and Keith Brooke, with more titles from John Grant and Anna Tambour. Future infinity plus authors include Paul di Filippo, Garry Kilworth and Molly Brown.

---in its first two months, infinity plus ebooks had three top ten bestsellers at Amazon

---there have been three infinity plus print anthologies

---Praise for infinity plus:
-"looks great. And it's good to find quality fiction on the web" (Ellen Datlow)
--"one of the Internet's most valuable resources for intelligent science fiction of high literary quality" (Gardner Dozois)
--"the best place for genre fiction on the web" (SFX)
--"first-rate" (Locus Online)

Learn more about Infinity Plus

You have subscribed to alerts for Infinity Plus.

You have been added to Infinity Plus's favorite list.

You can also sign-up to receive email notifications whenever Infinity Plus releases a new book.