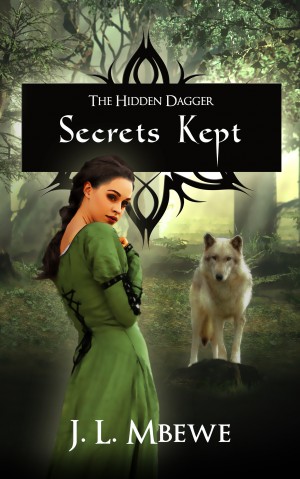 By J. L. Mbewe
Rated 4.00/5 based on 1 reviews
When a young half-elf discovers her mother's people are victims of a curse, she must free them before they are forced into a war against the nations. More
With a curse, she will build an army. With the dagger, she will undo the last sacrifice. But first the sorceress must find the secret keeper.

Torn from her homeland and thrust into a betrothal against her wishes, Ayianna learns her family has a deadly secret that now has her on the run. She joins forces with Kael, an embittered half-elf, and Saeed, an elderly High Guardian, to seek answers to her father’s death, the destruction of Dagmar, and the plains people’s bizarre behavior.

Ayianna discovers there is more at stake here than just her mother’s disappearance and her familial duty to her betrothed. The sorceress has cursed the plains people, and it is a race against time to release them before the sorceress resurrects an ancient evil.

Writing as J. L. Mbewe, Jennette is an author, artist, mother, wife, but not always in that order. Born and raised in Minnesota, she now braves the heat of Texas, but pines for the Northern Lights and the lakes of home every autumn. She loves trying to capture the abstract and make it concrete. She is currently living her second childhood with a wonderful husband and two precious children who don’t seem to mind her eclectic collections of rocks, shells, and swords, among other things. Here, between reality and dreams, you will find her busily creating worlds inhabited by all sorts of fantasy creatures and characters, all questing about and discovering true love amid lots of peril. She has two short stories published in The Clockwork Dragon anthology, and four short stories set in the world of Nälu. Her debut novel, Secrets Kept, was nominated for the 2014 Clive Staples Award. For more information about her journey as a writer mama and all things creative please visit her at http://jlmbewe.com/

About the Series: The Hidden Dagger

When a family secret kills her father, Ayianna must discover how to free the plains people from a curse before the sorceress resurrects an ancient evil.

Also in Series: The Hidden Dagger

J. L. Mbewe's debut Christian fantasy novel, Secrets Kept, introduces us to the world of Nälu. Her detailed world-building and intense storyline is sure to appeal to mature readers much like Jill Williamson's Blood of Kings Trilogy. Filled with diverse locales, languages, and creatures, this Adult/YA crossover is a welcomed addition to the Christian fantasy genre.

One of the biggest things that drew me to this novel was the diversity. I don't think that was a main focus of Mbewe's work, but several of the different populaces of Nälu seem to be based on African and other (e.g. Middle East, Eastern) cultures. Of course, we also have cultures reminiscent of more euro-western influences as traditionally seen in American fantasy, but it's really neat to see this unique mix in a Christian fantasy series.

Needless to say, Mbewe's world-building is epic. She's obviously thought out a lot more details and background information that isn't in the book. However, you're immersed right into it, learning bit by bit as you read more of the story. This type of fantasy isn't for everyone: people will speak foreign, fantasy languages and the unique terminology and names of characters and things can be overwhelming. But those familiar with fantasy novels shouldn't have too much of a problem. I wish there was a brief pronunciation guide included, at least for commonly referenced places, items, and main characters. However there is an illustrated map, which is a personal "must have" for a fantasy novel in my book.

Like Tolkien's Lord of the Rings, much of the story is centered a quest or traveling. It got to be wearying for me to read at times, but I think that was the point --to show the toll it took on the main characters. Besides her world-building, the action scenes are a strong point of Mbewe's. They're definitely more intense than what your typical Christian fantasy reader might be used to. It's not too graphic, but if it were a movie, I think it might just hit PG-13.

Aiyanna is a likeable heroine. Some might get frustrated with her, but for a girl who's world is suddenly thrown into disarray, I think she's coping as well as she can. My only criticism is with the ending. I felt like it kind of ended abruptly --they're still in the midst of a quest, a character decides something and then it ends. I would have liked a bit more of a conclusion. However, this is a series, so I guess it could be considered an emotional cliffhanger of sorts.

Regardless, I hope more secrets to the world of Nälu and Aiyanna's family are revealed as Mbewe continues this unique Christian fantasy series because it has it all: a detailed fantasy world, unique characters, action, mystery, and a bit of romance!

[Disclosure: I received a copy of this book from the author for review purposes.]

You have subscribed to alerts for J. L. Mbewe.

You have been added to J. L. Mbewe's favorite list.

You can also sign-up to receive email notifications whenever J. L. Mbewe releases a new book.