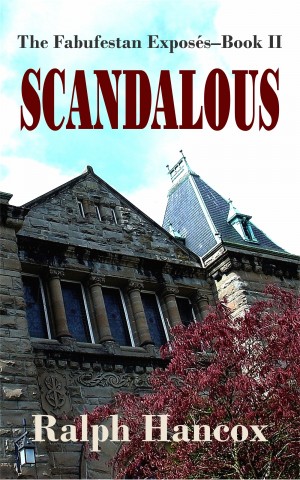 By Ralph Hancox
Rated 4.00/5 based on 1 review
Human trafficking, a sex scandal, political intrigue and murder—things start to boil over in Book II of the Fabubestan Exposés. The documentary TV crew led by the unassuming "Legs" Morowitz discover they've got a writhing python of a subject to tackle, while a political sex scandal erupts, jeopardizing the career of Angus McRossie, the provincial Minister of Democratic Action. More
SEX, SCANDAL, MURDER & MAYHEM

Human trafficking, a sex scandal, political intrigue and murder—things start to boil over in Book II of the Fabubestan Exposés.

Led by the unassuming ‘Legs’ Morowitz, Fabufestan’s script crew soon discover that the subject of their latest TV documentary has morphed into three separate issues: human trafficking, people smuggling and bogus refugees. To expose the horrors of this triple scourge, they have to convince their bosses to take on more financial risk to let them produce three, one-hour episodes, instead of the planned one-hour program.

“When we started looking into it for the prelims,” Legs continued, “it was clear we’d got hold of a writhing python. We had no idea at the start how monstrous the people smuggling racket was.”

After retiring from a long, distinguished career in the publishing industry, Ralph Hancox continues to write memoirs and novels from his mountain top aerie in Victoria, British Columbia.

Start reading his books chapter by chapter on Wattpad: https://www.wattpad.com/user/RalphHancox

About the Series: The Fabufestan Exposés

Intrigue, scandal, murder and mayhem ... it's all in a day's work as the Fabufestan documentary crew investigate some of society's greatest ills.

Also in Series: The Fabufestan Exposés

Reviews of Scandalous: The Fabufestan Exposés–Book II by Ralph Hancox

They're back - but in this second book the Fabufestan documentary team is less preoccupied with personal problems and more with across-the-desk interviews, just when we felt we were getting to know them. We do get to know one of their interviewees, Angus McRossie, provincial Minister for Democratic Action. His uncomfortable position trapped between two female control freaks, his "First Minister" and his wife, provides the real drama, relegating the Fabufestans to supporting roles. Whether any of the political shenanigans are based on fact makes enjoyable if groundless speculation.
I waited for the Team to jump into the sordid and dangerous topics of their exposé, but they stay safely in someone's office, even in Europe. A suggested field trip to Thailand, which we all know is a hub of wickedness, never materializes. A disgraced backbencher's gruesome murder in a Muskoka cabin. is related at second or third hand within the Premier's office - admittedly a venue which becomes increasingly more sinister. The interviews, which productively inform both us and the Fabufestans, suggest underlying tensions and emotions.
McRossie is an intriguing character (yes, I have an actor in mind should this series make it to TV), and it is comforting to note the continuing presence of the intrepid Chief Superintendent Willie Flack of the RCMP.

You have subscribed to alerts for Ralph Hancox.

You have been added to Ralph Hancox's favorite list.

You can also sign-up to receive email notifications whenever Ralph Hancox releases a new book.