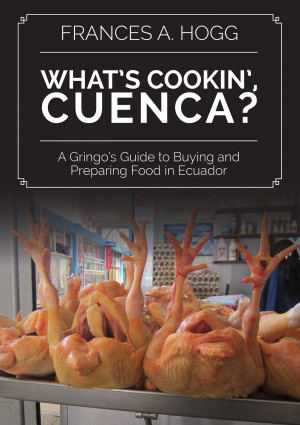 What's Cookin', Cuenca? A Gringo's Guide to Buying and Preparing Food in Ecuador

By Frances A. Hogg
Rated 5.00/5 based on 1 reviews
An entertaining and fun-to-read guide for buying and preparing food in the popular expat retirement community of Cuenca, Ecuador. This book supplies Spanish translations and information about differences between North American and Latin American foods, and contains recipes for comfort foods from "back home" that are hard to find. More
In a country where cooking oil comes in plastic bags, sweet potatoes are purple and baking soda is a legally-controlled substance, it helps to have a guide! Frances Augusta Hogg provides one in this fun-to-read, fact-filled tour of Cuenca, Ecuador's markets and tiendas. She provides hints about high-altitude cooking and baking, as well as Spanish translations of the names of foods and cooking supplies. She'll tell you where to find the foods and brands the expat palate may be missing. And for the things that can't be found? She's got recipes!
"This book should become your 'go to' reference for any and all questions pertaining to Ecuadorean food, food preparation, and food shopping in and around
Cuenca. The author has taken 95 percent of the guesswork out of adjusting to a new culinary landscape. Buy it and use it! You will be glad you did."
Chef Tom Peddecord - ACF Certified Executive Chef

Frances Augusta "Franny" Hogg spent 22 years living and working as a poverty lawyer in Detroit's infamous Cass Corridor, where she wrote a series of mystery novels featuring amateur sleuth, Callie Sadler. She spent the next decade in New York's Hudson River Valley, working as a freelance editor and story coach, and as a horror fiction editor for Dark Moon Books. In 2012, she and her husband, Robert Lochow, retired to Cuenca, Ecuador, where she divides her time between working as a volunteer teacher at a rural school for disadvantaged children, and writing.
Franny wrote a guide for buying an preparing food in Ecuador after witnessing the near implosion of an expat gentleman in a Cuenca supermarket, furious because "They don't have pancake mix!" Well, they didn't have pancake mix with a picture of Aunt Jemima on the box. Or mix in a box. Or anything with the word "pancake mix" on it. But they certainly did have the flour and leavening mix you use to make pancakes.
"I saw a need for a Spanish/English shopping guide, So I wrote one."

Learn more about Frances A. Hogg

What a great resource for anyone living in Ecuador or contemplating moving there! The author tells in a breezy and accessible way how to figure out the Spanish words for what you need, how to pronounce it, where to find it, and how to cook it. Even I, who basically didn’t know how to cook, am buying and preparing foods in Ecuador with the help of this book. There’s so much useful information on where and how to find things—whether fresh fruits and vegetables in the mercados or tiendas or U.S. - style items in the larger stores. The book incorporates numerous tips from many of the author’s friends. Wish I’d had it before my first forays into buying and cooking in Cuenca.

You have subscribed to alerts for Frances A. Hogg.

You have been added to Frances A. Hogg's favorite list.

You can also sign-up to receive email notifications whenever Frances A. Hogg releases a new book.