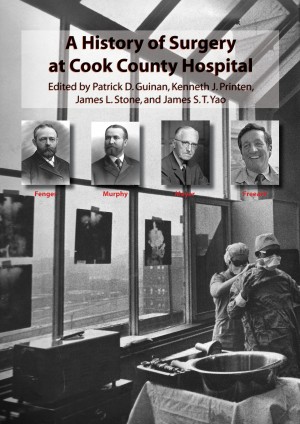 A History of Surgery at Cook County Hospital

By Patrick D. Guinan, Kenneth J. Printen, James L. Stone, James S.T. Yao
This book looks at a unique and unparalleled collection of individuals who together achieved something noteworthy. It is more than a history of a building on Chicago’s west side—it is an inside look at the people who made Cook County Hospital a center of top-flight medical education and world-class care through the years. More
From 1866 until the end of the 1950s, almost all of the attending staff at Cook County Hospital—and thus the instructors who prepared physicians for their life’s work—were unpaid volunteers. As was the case at all other large public teaching hospitals, appointment at County was an honor, public recognition of the doctor’s professional reputation. Before all-fulltime salaried positions were introduced in the 1970s and 1980s, the surgery teachers at County were drawn from a “Who’s Who” of Chicago surgeons.

Over time, their students came to recognize how remarkably good these surgical teachers were. This book looks at a unique and unparalleled collection of individuals who together achieved something noteworthy. It is more than a history of a building on Chicago’s west side—it is an inside look at the people who made Cook County Hospital a center of top-flight medical education and world-class care through the years.

Patrick D. Guinan, MD, MPH, is a Clinical Assoc. Professor in the Dept. of Urology, University of Illinois, College of Medicine in Chicago. He completed his internship at Cook County Hospital in 1962 and the Urology Residency at CCH in 1969. In 1975, he received a Masters in Public Health from Columbia University. He served as Director of Urology of the Chicago Dept. of Health, 1970–75; Chair, Division of Urology at CCH, 1975–85 and at UIC, 1978–85. He is now Chairman of the Board of the Hetkoen Institute.

Kenneth J. Printen, MD, completed his internship at CCH, 1961–62 and was drafted for military service, 1962–64. He returned to CCH and finished the surgical residency in 1968. At the University of Iowa, College of Medicine he rose to Professor of Surgery (1969–87). He returned to Chicago and became Chief of Dept. of Surgery, St. Francis Hospital. Since 1987, he taught at Loyola, Northwestern, Chicago Medical School, and the University of Illinois Metro Residency. He retired from the Army Reserve as a Brigadier General in 1984.

James L. Stone, MD, was a Surgical Intern at CCH, 1974–75, followed by Surgical Residency, 1975–76 and a Cook County-UIC Neurosurgery Residency, 1976–80. He remained as faculty in Neurosurgery at UIC and attained Assoc. Professor and Chair of the Neurosurgical Division at CCH in 1987. In 1992, he was appointed Professor of Neurological Surgery at Loyola, and later Rush, until his retirement in 2003. He acted as Interim Head at CCH in 2004 until he rejoined UIC as Professor of Neurosurgery and Neurology. Dr. Stone remains active in the clinical practice of neurosurgery and neurophysiology at UI and the affiliated Advocate Illinois Masonic Hospital as well as a voluntary appointment in Neurosurgery at CCH.

James S.T. Yao, MD, PhD, completed a rotating internship at CCH, 1961–62 and stayed on for General Surgical Residency, 1962–67. He furthered his training in vascular surgery at St. Mary’s Hospital Medical School. At the same time, he received a Ph.D. in vascular physiology from the University of London. He returned to Chicago in 1973 to serve as Attending Surgeon at Wesley Memorial Hospital (now NMH) and on the faculty of Feinberg School of Medicine, Northwestern University. He was appointed Magerstadt Professor of Surgery in 1985 and served as Chief of Division of Vascular Surgery, 1988–97 and Chair of Dept. of Surgery, 1997–00. Dr. Yao is now retired as an Emeritus Professor of Surgery at Northwestern.