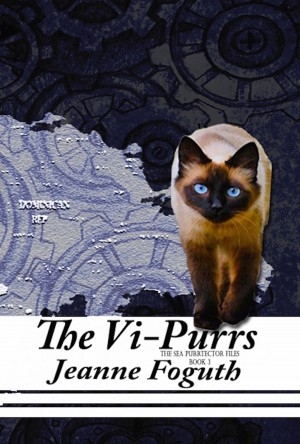 By Jeanne Foguth
Rated 5.00/5 based on 2 reviews
The Daily Mews reports continued violence in the Dominican Republic Purrtectorate.

Xander discovers that the Moreau situation is still affecting the ability of Catamondo to purrtect cats. Worse, the office of the Purrtectorate seems to be involved.

Though Jeanne began her career technical writing, her love of romantic-suspense, whether it be present, future or in an unknown galaxy inspired her to write the novels she wanted to find in bookstores. Since marrying, Jeanne and her husband have lived from the arctic to the tropics, as well as from yacht to off-grid mountain home. She loves using vivid colors and flowing shapes in her oil paintings as well as creating edible landscapes.
You can always find out what she is working on and/or contact her at: www.jeannefoguth.com.

About the Series: The Sea Purrtector Files

In his official capacity, Kamikaze Xander assists cats wherever he advises his humans to anchor.

Reviews of The Vi-Purrs by Jeanne Foguth

We love this series. It is perfect for any cat loving family. We loved getting to know more about Mischief in this book and the kids could relate to her antics. As an adult I can see how the series gently touches on today's big issues. I also appreciate the accurate history of disasters during the story.
If you like lizards, rats, or cats and slightly suspenseful plots this is the book for you.

(reviewed the day of purchase)
Marcha Fox reviewed on March 18, 2016

Xander de Hunter fans will be delighted to know that their favorite undercover cat is at it again in this exciting and vividly rendered adventure tale (or tail, as the case may be). If you've already read "Purranoia" (and you should, to fully appreciate this sequel) you'll know that there were many unanswered questions at the end. Furthermore, Xander picked up a lovable sidekick, appropriately named Mischief. Her rebellious and inquisitive yet highly intelligent nature adds another important member to Catamondo. She continually rubs Xander's fur the wrong way, especially her weird love of water sports, making the Sea Purrtector wonder if choosing to mentor her was really a good idea or not. The tension between these two adds conflict and more suspense, further enriching the story and plot.

The tale gets started when Xander's buddy, Merlin, reminds him of the many unsolved issues from their Haitian adventure, driving him to follow up on the situation. This takes them to Jimaní in the Dominican Republic's Independencia Province, where Mischief's tante, Lucy Fur (be sure to say that aloud to get the implications) resides. They'd never fully determined the objective of Dr. Moreau's genetic engineering operation. Furthermore, what happened to Damon, Chester, Mingus, Matsu as well as Clade and Allele, the odd cat-snake mix known as the vi-purrs?

An entertaining cast of characters including a rat named Scar, a chameleon named Mars, another cat named Sharkey who loves to quote Native American wisdom, and numerous others join with Xander and Mischief to find the answers. Their efforts are further complicated by a hurricane, adding to the suspense and intrigue. As always, the settings are described in vast detail such as can only be accomplished by an author who's been there.

The complex world of Catamondo just gets better and better. If you love cats and a good adventure story that would make an excellent animated movie, this series is for you.

You have subscribed to alerts for Jeanne Foguth.

You have been added to Jeanne Foguth's favorite list.

You can also sign-up to receive email notifications whenever Jeanne Foguth releases a new book.