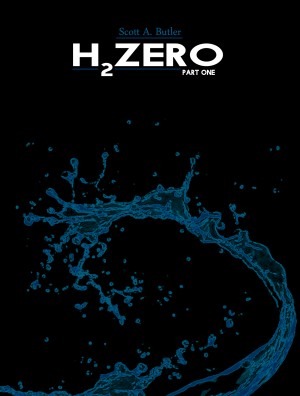 After the fall of the British government, the military now control what remains of the population in quarantine zones. When orders fail, bullets fly. If you try to leave, you're enslaved.
Outside the quarantine zones you're confronted with bandits, psychotic cults and ... those ... things.

H2Zero is a wake-up call to humanity. We may not yet realise it, but extinction is closer than we think.
Each book in the series is set in a different time to explore the events that have unfolded and each book will follow the footsteps of a different person as they struggle to survive in this new world.

H2Zero: Part One is a prequel which introduces the reader to the unique world through the eyes of the author.

A selected quote
"The main element crucial for the survival of life is also a demon in disguise; it will snatch your life away as quickly as you were given it. There’s no god, it’s the elements that control this world and everything on it."
Available ebook formats: epub mobi pdf lrf pdb html
First 15% Sample: epub mobi (Kindle) lrf more Online Reader
pdb
Price: $1.09 USD
Buy Add to Library Give as a Gift
How gifting works
Create Widget
Tags: military dystopia water post apocalyptic post apocalypse virus gritty dystopian
About Scott A. Butler

After losing his natural hearing at a very young age, Scott developed a very active imagination. He discovered his passion for writing when he found an old typewriter in his grandparent's house at a young age. From then on he would pen or type stories for his own entertainment and share them with his family.

At the age of twelve, Scott discovered through his grandfather that he is related to a famous author and poet, Samuel Butler, who is best known for his utopian novel, "Erewhon", for being one of the first authors to describe machines with artificial consciousness and translating some of Homer's works into English.
Writing runs Scott's blood.

As a child, Scott was fascinated and influenced by authors such as Roald Dahl and R.L. Stine. Growing up he gained further influence from more authors such as Terry Pratchett, J.R.R Tolkien and Stephen King, to name three.

Learn more about Scott A. Butler

Reviews of H2Zero: Part One by Scott A. Butler

You have subscribed to alerts for Scott A. Butler.

You have been added to Scott A. Butler's favorite list.

You can also sign-up to receive email notifications whenever Scott A. Butler releases a new book.