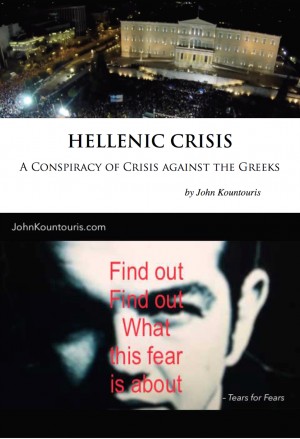 By John Kountouris
This book is about the Greek economic crisis (2009–present) revealing the true causes behind it. More
This book is about the Greek economic crisis that started the end of 2009 and which continues on to this day. It also demonstrates that the origins of this crisis dates back much further in Greek history to the period of the Greek Byzantine Empire, which even back then, was going through a crisis the results of which are still being felt today by the modern Greek state which is nothing more than a minuscule of what it was during those past glory days of world domination from Alexander the Great to all throughout the Byzantine Empire.
Available ebook formats: epub
Price: $14.99 USD
Buy Add to Library Give as a Gift
How gifting works
Create Widget
Tags: greece imf eurozone greek crisis troika greek debt alexis tsipras greek memorandum greek pensions
About John Kountouris

John Kountouris, is an author, independent researcher, professional Modern Greek translator and Ancient Greek teacher/tutor. He has worked for companies like Technicolor, Deluxe digital and DREAMWORKS on the Greek subtitles for Hollywood movies, Apple Inc. on the Greek translation of Apple’s various software, legal firms on Greek legal documents and more.

He has a business & management degree from California State University Long Beach. He also has completed NYU's Foreign Languages, Translation, and Interpreting credential program for Modern Greek. He is also credentialed by the US Department of Justice as one of their legal Greek Translators/Interpreters.

John works with Greek media and appears on Greeks TV and radio. He also writes for top Greek publications from Greece.

He also tutors and teaches both Ancient and Modern Greek in language institutes and privately. In the Pasadena, California area he has tutored with great success Greek students from the internationally known Fuller Theological Seminary.

In mid-2014 John landed a great opportunity to become accredited as a university-level professor by the online-based, accredited college course provider World Mentoring Academy (worldmentoringacademy.com) which offers college level classes online which count for college credit. Its courses are approved and accredited by the ACE. "A Community of Learning" as its founder and administrator, Mike Williams, put it, WMA is:

John has been researching and studying the Greek language, culture and history for over 15 years. In particular, has been studying the Greek language from its development from ancient times to the Byzantine-Middle ages to its modern forms of today. His book, YOUR ACADEMIC GUIDE TO THE GREEK LANGUAGE, CULTURE & CIVILIZATION ((available on Amazon.com) reveals the truth and the power of not only the Greek language, but also of the Greek people and their civilization as well. One of John’s most beloved, prized books on this is MEDIEVAL & MODERN GREEK by Robert Browning which is fantastic book that describes the development of the Greek language from ancient times to today which is also something that he specializes in and teaches.

Another one of John’s most prized books on Greek modern history is prominent Greek-American writer Nicholas Gage’s ELENI which speaks of the era of the terrible Greek civil war between the Greek Royalists and the Greek Communists.

John’s deep research of the Greek language has enabled him to utilize this in his teaching methods which extends to such things as:

• Focus on the BASICS because if one masters the basics, he will soon be a MASTER
• View and teach Greek as a great DRAMA with emphasis on the ALL the ACTORS (the
elements of Greek grammar) and the PLOT (the Greek story, what it’s CONVEYING to the
reader) which the student MUST KNOW or else he shall loose track of the story
• Utilization of some of the best scholarly Greek teaching material from scholars all over the
world from professors who published their works in the 19th & 20th Centuries
• Pictorial, visualization and graphical representation of Greek letters, words, concepts and
by a method he has coined “lexical reality” which excites the imagination causing the
Greek language to come ALIVE in the mind of the student
• Research material from some of the best academic and scholarly groups from Greece
itself who have done extensive research on the Greek language
• New, unfolding research on the Greek language demonstrating how...
- each letter of the Greek Alphabet emits a sound and image
- every Greek word accurately, not randomly, came from an original "namer" and has a
direct causal relationship between the cause and the causator, the signifier and the
signified
- the pronunciation of the letter "N" coordinates the brain while, simultaneously,
transporting oxygen to the same
- in 1996, in the German medical journal MEDIZIN-JOURNAL, a scientific work was
published, according to which: "The pronunciation of the letter 'N' carries oxygen to the
brain and that it was no coincidence that the ‘N’ was placed exactly in the middle of the
alphabet – the first Greek alphabet with 27 letters."
- also, from Harvard medical research, it was found that the recitation of the
Homeric poems in the original Greek, among other things, is good for the heart, as a
breathing exercise
- it is accepted by modern Psychiatry that the final sigma, when pronounced, calms the
individual pronouncing it

But there is so much more to discover about Greek and this author is on a quest to discover it ALL and make it available to those who desire to learn the deeper things of Greek!

You have subscribed to alerts for John Kountouris.

You have been added to John Kountouris's favorite list.

You can also sign-up to receive email notifications whenever John Kountouris releases a new book.