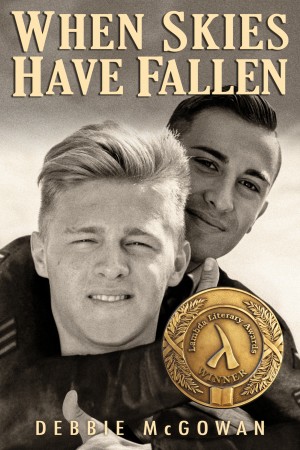 When Skies Have Fallen

Their love is forbidden, by both the armed forces and the law, but with Jean’s cunning and support, Arty and Jim try to bridge the distance between them and find true love despite the danger and a life-threatening disaster that could destroy Arty’s dreams for good.

Can the pair stand strong together, no matter how many skies have fallen?

Winner of the Lambda Literary Award for Gay Romance.

Life isn’t a fairy tale. These two know that better than most. These men are survivors. Against all odds, they made it through hardships, separation, and war. They clung to hope where little existed and, as the skies fell around them and the world was torn apart, found strength in loving each other.

Suddenly, the war was over. Battlefields lay silent and troops prepared for the journey home. These two were more than ready. They had experienced enough loss, grief, and pain to last ten lifetimes. The country they left behind may not have been ready to accept them, but they were prepared to live no matter how many skies had fallen.

You can tell me the story of how these men met, but what I really want to know is what happened to these men after this photo was taken. Did their love endure the trials of a return to civilian life? Were they able to overcome the trauma of war and find peace together?

About the Series: When Skies Have Fallen

Not a series as such, but a means to connect the novel and the Christmas special

Also in Series: When Skies Have Fallen

Beautiful love story. I loved the descriptions and the (moderately) slow evolution of the plot. I found this book delightful and the characters charming. I couldn't stop reading until the end.

A very well-written, interesting book about being gay in an inhospitable time and circumstance. Well-drawn characters who seem real and probable and good attention to both detail and emotion. A very good and believable romance.

This is the sweeping story of Artie and Jim, two gay men trying, like everyone else, to survive during WW2. It is obvious right from the start that the author has taken great pains to be historically accurate, giving this epic story validity as a gay historical romance so realistic it will take your breath away.
Have you ever made a snow ball, then rolled it around until it gets bigger and bigger, taking away all the snow and leaving behind only freezing, ruined grass? This story, that is what it does. It starts off sweet and gentle, then gains momentum and grabs every molecule of snow, like an enormous avalanche encapsulating history, morality, friendship, loyalty and love.
It is a story that is indeed about the sky falling, and the world going mad, but in the middle of that maelstrom there are two people and a light that never goes out. To me, that quiet and clever gentleness is Debbie McGowan.
I read this story in parts as it was written, then again last night. Each time I noticed something else, another aspect to this intricate world that the author depicts so starkly. Although it is set almost eighty years ago, too many of the issues in this story are still shouting their nasty voice loudly today. LBGT people around the world are still dictated to by political, economic, religious institutions. Who is the enemy and who is the friend?
I cried a few times when I read this, and so will you. It is a very beautiful story about ordinary people trying to do ordinary things. Does anyone ever win a war? Maybe not, but sometimes, love can triumph :D