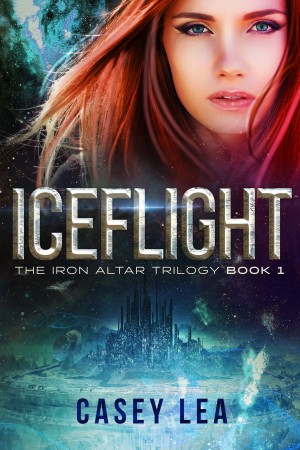 Kidnapped, enslaved and lost on the Outer Rim of a mighty civilization light-years from Earth, the only person she can turn to is her enigmatic new owner. A dishonored outcast, he is just as alone as Darsey. Exiled by his people and struggling to survive, the last thing he wants is a rebellious primitive as a slave. She complicates his efforts to hide a dangerous secret and to complete a quest that is likely to claim both their lives. They will only survive if they can find enough trust to forge an unwanted alliance.

Casey Lea is a mother-daughter writing partnership, which began a couple of decades ago (and counting) with the birth of Emma Casey, to Shelley Lea and Gary. A shared imagination and love of the fantastic eventually led to the creation of a growing number of books.

We write to share our passion for science-fantasy with our readers and enrich your world. Our sole goal is to send you screaming round the room, with your hair on fire and one of our stories in your hand. Metaphorically of course. Our novels are a rollercoaster, so strap yourself in.

We deliver a powerful emotional experience in fabulous settings filled with characters you love.

We achieve this with the help of our wonderful hubbies, gorgeous girls and slightly scabby cat. The dog was our most enthusiastic cheerleader and we trust she’s still looking down on us with a huge, slobbery grin.

We live a topsy-turvy life down under in New Zealand and are thrilled by modern technology’s ability to spread story and connect minds. We look forward to sharing our worlds with you…

About the Series: The Iron Altar

The Iron Altar trilogy follows the paths of two women, one young and the other ancient beyond belief. Both are destined to die on the same altar.

One death would precipitate mass murder and destroy billions. The other sacrifice would claim only two lives - the martyr and the monster who made the Iron Altar.

Amber Grace will be that martyr, but only if she reaches the altar first. And only if she still thinks we are worth dying for...

Reviews of IceFlight by Casey Lea

I liked the book, not perfect, a bit too much violence and some of the characters actions don't make sense. I don't mean that in the sense that we just don't know the background, I mean people don't react that way and unlike 'Zhlindu', there is no explanation of how human nature has been changed to make them that way, at least in this volume. But other than that it's a monumental work reminiscent of Dune in some ways, like the generations long breeding program and the intrigue among the nobles of the Empire(s). It's a well-done and somewhat familiar universe using mostly familiar technology and forms of government with the usual Empires, space pirates, slavers, etc.
There are several species of humanoid aliens that were supposedly created by genetic manipulation, but even that doesn't seem like it would be enough to let them interbreed. I really need a common ancestor to make that happen and I suspect there is one and I suspect they came from Earth in the distant past.
But my main complaint, this FREE book is put here, so Smashwords makes nothing, while advertising for the other books which someone said are only on Amazon (kindle). I don't go on Amazon even though I have eight older versions of my own in paperback there so I don't know. Because of that I cannot bring myself to give this the four stars it deserves.

I loved it really takes you to other worlds. When Wing freaked about twins that was stellar! Cover to Cover it's brilliant. Pure genius!

The author has very good imagination skills. good work. enjoyed it. There are many characters and creatures which makes it difficult to me to follow it in places and the fact that Darsey fell for someone who is part of the team which caused the death of her crew doesn't sit well with me.(Though he tries hard to compensate it) otherwise it is enjoyable.

Very enjoyable and novel storyline.
Pity Frostbite (book 2) only seems to be available for Kindle.

Grammar and tidbits here and there about tossed aside, this book is very, VERY good.
Some of the terms were hard to latch onto on their, that is without having had the wonderful insight of a highly sarcastic but super smart kick-ass heroine-ish. And she definitely IS NOT a wilting violet. She's supa cool-headed, even despite the alien (ha, ALIEN...) allure of well...aliens!!!
It's so sweet and yet thrilling the obvious bloom of character development between the two mains. Keep writing! I'm gonna smoozh on over to your other Altar Iron works. Well done!

Well written space opera with cool tech (once my brain conjured them to life), interesting aliens with funky speach and a strong female lead. Good read!

Very enjoyable reading, couldn't put it down and was left hoping the next book comes out ASAP.

I agree! It is an out standing novel! I couldn't put it down! I can not wait for the other two novels to come out!

You have subscribed to Smashwords Alerts new release notifications for Casey Lea.

You have been added to Casey Lea's favorite list.

You can also sign-up to receive email notifications whenever Casey Lea releases a new book.