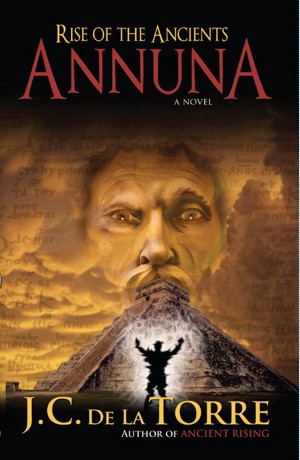 Rise of the Ancients - Annuna

By JC De La Torre
Rated 2.00/5 based on 1 reviews
The latest two books of the Rise of the Ancients series combined into one action packed novel.

Book II picks up where Ancient Rising left off, with Dan Ryan and company racing the gods to a secret location that holds the key to saving the world.

Finally, in BOOK III Ryan must go through Heaven and Hell to convince the Annuna to join in a climactic battle with humanity hanging in the balance

JC De La Torre is a speculative fiction author who lives in Wesley Chapel, Florida - a suburb of Tampa. De La Torre has written two critically acclaimed novels, the Rise of the Ancients saga, and Nightmares from Eberus - A Speculative Fiction collection. He also is a featured columinist for Bleacher Report on Tampa Bay sports.

De La Torre is married to his lovely wife, Rita, and their family consists of their Yorkshire Terrier, LeStat, and their two cats Artemis and Marius.

JC has a passionate love for speculative fiction, especially Science Fiction, Fantasy, Alternate Realities, and the Occult. His writing will include all of these sub-genres as well as other interesting excursions. His fast paced writing style and descriptive narrative has been compared to best selling authors Dan Brown and Clive Cussler. JC's work features action, adventure, horror, a bit of the supernatural, and essentially something for every one.

Rise of the Ancients - Annuna
One man stands against the extinction of humankind. This is the book trailer for Rise of the Ancients Annuna by JC De La Torre. It will be available at Amazon.com and all major online retailers. For more info, visit http://www.jcdelatorre.com

Also in Series: Rise of the Ancients

The second of the series, it does not make sense unless you have read the first book. This volume contains a lot of historical background which interrupts the action for long segments. The quick pace of action and dialogue which kept the first volume moving are not evident in this volume.

You have subscribed to alerts for JC De La Torre.

Would you like to favorite JC De La Torre?

You have been added to JC De La Torre's favorite list.