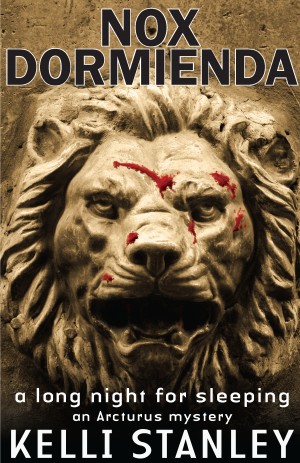 By Kelli Stanley
Rated 4.00/5 based on 1 review
Nox Dormienda is the award-winning debut novel of critically-acclaimed author Kelli Stanley (City of Dragons), and the first of a series in a new genre: Roman Noir. Featuring Arcturus, a hardboiled protagonist in the best Philip Marlowe tradition, Nox is a different kind of historical mystery, a suspense thriller that combines a classic noir style with the rich texture of the ancient past. More
Winner of the Bruce Alexander Award for best historical mystery of 2008, Nox Dormienda is critically-acclaimed author Kelli Stanley's debut novel and the first book in a new series and new genre: Roman Noir.

Vibius Maecenas, spy for Emperor Domitian, lies on an underground altar ... his throat slit to the spinal chord. Arcturus has one week to find out who butchered him--and why--before Agricola and all of Britannia are plunged into civil war with Rome.

Nox Dormienda is the first book in the Roman Noir series that continues with The Curse-Maker, available wherever print and e-books are sold.

" ... takes the reader on a colorful tour of this singular culture high and low, from jails and brothels to the corridors of power. First-timer Stanley is sure-footed and enthusiastic about history ... and crafts a satisfyingly intricate puzzle ..." -- Kirkus, May 15, 2008

"In Nox Dormienda, Kelli Stanley has created a startling new genre of mystery: the Roman noir. Written in a fresh and uncompromising voice, here is a novel as evocative of ancient times as it is masterful in crafting a mystery as entangled and ingenious as any modern story. I look forward to vanishing again into the world she has created. Don't miss your chance to do the same." -- James Rollins, New York Times bestselling author of The Judas Strain

"From first page to finis, Nox Dormienda by Kelli Stanley is chock full of chills, thrills, and breath-taking adventure. Fueled by fascinating characters and rich details from Londinium in 83 A.D., this unforgettable tale brings the past eerily alive while leaving you hungering for the next book in what surely will be an exciting series. Stanley is a terrific writer." -- Gayle Lynds, New York Times Bestselling Author of The Last Spymaster

"Nox Dormienda (A Long Night for Sleeping) nigh cost me a night's sleep! The language is a sheer treasure ... from classical to sheer class and for a book that is so meticulously researched, it has a wild and wondrous sense of humour. What a series this is going to be! Imagine Ellis Peters re-written by Elmore Leonard and you'll have some notion of this gem of a novel--and it moves like a gladiator on speed." -- Ken Bruen, Barry and Shamus Award-winning author of Priest
Available ebook formats: epub mobi pdf rtf lrf pdb txt html
First 15% Sample: epub mobi (Kindle) lrf more Online Reader
pdb
Price: $3.99 USD
Buy Add to Library Give as a Gift
How gifting works
Create Widget
Tags: thriller suspense mystery murder mystery espionage historical noir crime fiction rome roman druid britain hardboiled ancient rome noir fiction hardboiled detective hardboiled mystery fiction thrillers kelli stanley historical noir
About Kelli Stanley

You can learn more about Kelli and the worlds she creates at http://www.kellistanley.com.

I thoroughly enjoyed reading this. Those who like the Falco (Lindsay Davis) or Medicus (Ruth Downie) style historical novel will also enjoy this. I give it 4/5 stars because one must keep back something for masterpieces, musn't one? ;-)

You have subscribed to Smashwords Alerts new release notifications for Kelli Stanley.

You have been added to Kelli Stanley's favorite list.

You can also sign-up to receive email notifications whenever Kelli Stanley releases a new book.