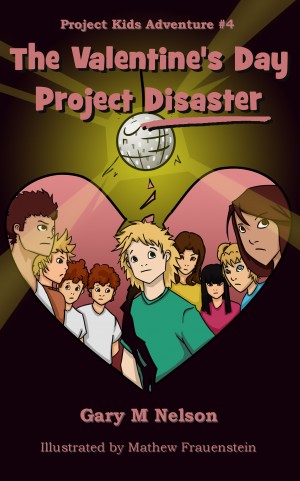 By Gary M Nelson
Amanda has been sweet-talked (tricked!) into organizing the dreaded Middle school Valentine’s Day school dance. Burdened with a promise to deliver the dance, a reluctant school, a meddlesome bully, and a reputation to uphold for delivering projects, the Project Kids are in big trouble. They will definitely have to learn some new skills - and break a few rules along the way in order to pull it off! More
The biggest problem with success is that people always expect more from you, thought Amanda. She stared hard at the folded piece of paper sitting on the desk in front of her, hoping it would just go away. Why did I say yes? She wondered. I must have been crazy! We do a couple projects, and now they want me to do this?

She cautiously poked at it again with the end of her pencil, like it was a bomb about to go off. She flicked at the crumpled edge of the paper, those terrible words hidden just out of sight but taunting her nonetheless.

Finally, she could take it no more. She put down the pencil and grasped the paper with shaking hands. Why did I agree to run this thing? What do I know about this stuff, anyway?

With agonizing slowness, Amanda opened up the paper to once again read those terrible words, the words that she had committed to. The thing she had promised to do.

Yes, no problem, Ms Moldiva. Sure! It’ll be fun!

In large, bold letters at the top of the crinkled sheet of paper were the words:

Amanda’s shuddered. It’s going to be a disaster!

Join the Project Kids in their fourth big adventure as they come together to organize the Valentine’s Day dance at A. J. Wilkins Intermediate School. Along with the challenges of tackling their biggest project yet, an age-old question will test them to their limits. Will cupid strike the Project Kids - or even worse - pass them by?

Gary M. Nelson, BSC, PMP (Gazza) is passionate about sharing knowledge and making Project Management concepts more accessible, particularly to new and aspiring Project Managers (of all ages). Said another way, he likes to tell stories to help convey complex concepts in a way that helps the concepts 'stick'. Who says learning shouldn't be fun?

Born in Calgary, Alberta (Canada), Gary moved west to B.C. at the very early age of 2, where he spent most of his formative years - aside from a 6 year stint where he learned to appreciate living in a very small town of 800 people. He then attended high school in Surrey, B.C. and went on to graduate from Simon Fraser University (BC, Canada) in 1989 with a major in Computing science and a minor in English - an odd but useful mix (a techie who can write clearly)!

Gary was tricked into becoming a Project Manager by his first manager, and has never looked back. His international experience includes projects in New Zealand, Taiwan, Hong Kong, the US and Canada, working on projects in the Telecom, Student Information Systems, Local Government and Healthcare sectors.

Having wanted to write books since high school, it took many long years of successful procrastination until he finally felt he had something useful to write about, and wrote his first book of stories in 2012...on Project Management, of all things. Next, presented with the terrifying challenge of writing for children, he enlisted his youngest sons to be the first victims (reviewers and editors) and the Project Kids series of books were born. Several years on, he is amazed to see the books being translated into multiple languages, and reaching into schools and homes around the world.

He enjoys speaking and training, has presented at numerous events and conferences and is also the author and host of Gazza’s Corner Project Management Blog and Podcast.

Gary currently lives in New Zealand with his wife, three sons and two cats, and is loving every bit of it.

You have subscribed to alerts for Gary M Nelson.

You have been added to Gary M Nelson's favorite list.

You can also sign-up to receive email notifications whenever Gary M Nelson releases a new book.