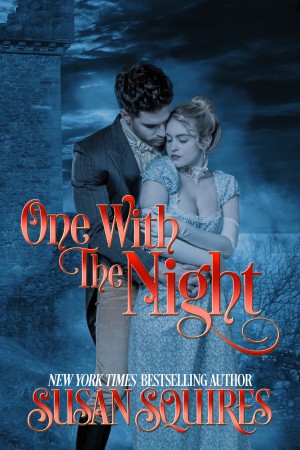 One With the Night

By Susan Squires
Callan Kilkenny comes home to the Highlands of 1822 Scotland in search of a cure for the parasite in his blood that makes him a vampire. Dr. Blundell has been experimenting to find a cure because his daughter Jane was infected. But others want the cure for more sinister reasons. To save Jane and the rest of their kind, Callan may have to give up his last chance at redemption. More
Far from the glittering lights and shallow bustle of 1822 London lies another world—a realm of shadows and secrets, where desire holds dominion and passion know no limits…

Jane Blundell’s keen intellect and wit have always set her apart from her marriage-minded peers. But such differences are nothing compared to the change that comes upon her when she is infected by a blood sample in her father’s laboratory. Suddenly her veins resonate with a terrifying, exhilarating power. Dr. Blundell takes Jane to the Scottish highlands to research a cure, where she collides with the only man who can understand her hunger—and slake her unending desire…

Callan Kilkenny has returned to England from Marrakech, still filled with self-loathing at the deeds he committed in the name of a beautiful, depraved vampire. Now that he has tracked down Dr. Blundell in hopes of a cure, he has also found a kindred spirit in Jane. Her passion and her blood call to Callan, fueling a carnal need that shocks them both with its intensity. But others have come in search of the cure too…for reasons that are deadly. And to save Jane and the rest of their kind, Callan must risk everything—even his last chance at redemption…

ONE WITH THE NIGHT
“When it comes to combining extreme sensuality with dangerous drama, no one does it better than Squires.”