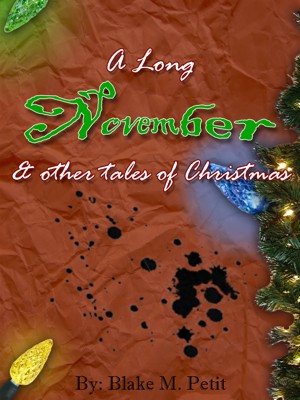 A Long November and Other Tales of Christmas

By Blake M. Petit
Duncan Marks is fed up with Christmas arriving in October, but his wife and son are Yuletide nuts. To make matters worse, the sudden appearance of a mysterious spirit makes it clear that the future of Christmas itself may rely on Duncan finding a way to open his heart. Duncan's story, and eight others by author Blake M. Petit, will give you the gift of new favorites you'll re-read each year.
Available ebook formats: epub mobi pdf rtf lrf pdb txt html
First 25% Sample: epub mobi (Kindle) lrf more Online Reader
pdb
Price: $2.99 USD
Buy Add to Library Give as a Gift
How gifting works
Create Widget
Tags: love humor fantasy short stories christmas superheroes
About Blake M. Petit

Blake M. Petit is a freelance writer, columnist, reviewer, podcaster, actor, director, teacher, and unlicensed tree surgeon from Ama, Louisiana. He is the author of the novels Other People’s Heroes and The Beginner, as well as the podcast novel A Long November. His weekly comic book column, Everything But Imaginary, has appeared Wednesdays at comiXtreme.com since 2003. In January of 2007 he joined with his longtime friend Chase Bouzigard to host the weekly 2 in 1 Showcase comic book podcast, appearing every weekend at comiXtreme. Blake is a member of the board of directors of the Thibodaux Playhouse theatre company in Thibodaux Louisiana, where his original stage play The 3-D Radio Show was produced in 2004. In a former life as a newspaper editor, his weekly Think About It column won the Louisiana Press Association Award for best column in 2001. In his free time, he teaches high school English, which at the moment pays better than the rest of his more impressive-sounding endeavors put together.

Reviews of A Long November and Other Tales of Christmas by Blake M. Petit

You have subscribed to alerts for Blake M. Petit.

You have been added to Blake M. Petit's favorite list.

You can also sign-up to receive email notifications whenever Blake M. Petit releases a new book.