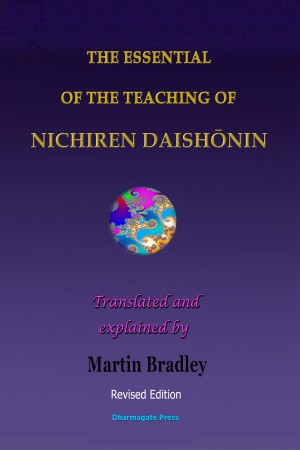 The Essential of the Teaching of Nichiren Daishōnin

Martin Bradley was born in Richmond (Surrey, England) in 1931. From a very young age he discovered Far Eastern Culture (Encyclopaedia Britannica, Lafcadio Hearn, etc.). In 1947, he started to learn Classical Chinese from Arthur Waley, who taught him how to teach himself. In 1951, he met William Willetts, the author of Foundations of Chinese Art from Neolithic Pottery to Modern Architecture, who guided him in his understanding of Sino-Japanese calligraphy. In 1954, he received lessons in Literary Tibetan from David Snellgrove. During this period he supported himself by means of his painting.

In 1960, Bradley obtained a travelling scholarship from the Brazilian Government, and he stayed in Brazil for two years, painting various pictures for the decoration of the new presidential palace in Brasília (o Palácio da Alvorada). Supported by a contract from his Parisian art dealer (R. A. Augustinci of the Galerie Rive Gauche), he was able to travel to Nepal where he studied the Buddha teaching and at the same time taught French at Kathmandu University. In 1970, he settled in Hong Kong, where he gave lectures on Western art history and also studied Buddhism under Hsin Kuang, who was then the Abbot of Tung Lin Temple. In 1972, he travelled on to Japan, where he studied the language and other aspects of Japanese culture.

In 1974, Martin returned to Italy and in 1975 met his wife, who was then a student at the Accademia di Belle Arti di Roma. He has been using Japanese as a daily language ever since. After living in Paris for ten years, he and his wife moved to Bruges. Due to his deep interest in the Buddha teaching over the last few decades, they moved to Japan in 2008, where Bradley now lives quietly and spends his time translating the various writings of Nichiren Daishōnin.

“From the onset, his biography is fascinating, almost what we could label as ‘fictional‘, and even if we do not wish to delight in the anecdotal, it always helps us understand—albeit superficially—the circumstances that formed and shaped the author’s personality in order to understand his accomplishments, especially in the case of Bradley, whose work displays a huge grasp of knowledge and life experience, which permeated his existential philosophy, and are transmitted and molded into his work.”

You have subscribed to alerts for Martin.

You can also sign-up to receive email notifications whenever Martin releases a new book.