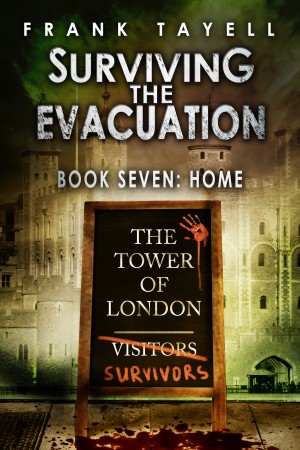 By Frank Tayell
The outbreak began in February. Billions were infected. They died. They came back. Out of the tens of millions in southern England, only ninety people remain. They sought sanctuary behind the walls of the Tower of London, but they were betrayed, and are now besieged by the living and undead alike. Some must be sacrificed so others might find somewhere in the undead wasteland they can call home. More
The outbreak began in February. Nations went to war. Governments collapsed. Billions died in the chaos and anarchy that followed. Billions more were infected. They died. They came back. Zombies.

It is now October, and out of the tens of millions who lived in southern England, only ninety people remain. They sought sanctuary behind the ancient walls of the Tower of London, but it was only a temporary refuge. There is no more food to be scavenged from the ruins of the old world. Their water supply is polluted. As the days get shorter, the weather worsens, and people begin to get sick.

They have been betrayed and are besieged by the living and undead alike. Over their heads hangs the threat of a last catastrophic weapon. This spectre of the old world conspiracy that brought the living dead to plague the Earth leaves them with a terrible decision. Some must be sacrificed so that amidst the horror, others might find somewhere in the undead wasteland that they can call home.
Available ebook formats: epub mobi pdf rtf lrf pdb txt html
First 20% Sample: mobi (Kindle) lrf pdb Online Reader
Price: $2.99 USD
Buy Add to Library Give as a Gift
How gifting works
Create Widget
Tags: london government conspiracy survival dystopian future post apocalyptic fiction zombie apocalypse novel series british zombies near future fiction undead outbreak
About Frank Tayell

Reviews of Surviving The Evacuation, Book 7: Home by Frank Tayell