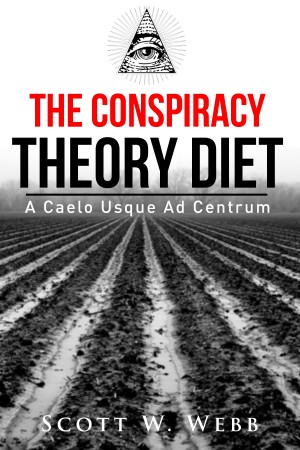 By Scott Webb
Rated 5.00/5 based on 1 review
The statistics tracking illnesses in America reveal that something isn't working. Do we really need more books about HEALTH? Probably not, suggests Scott W. Webb. Perhaps we might peer under the veneer of what's going on and change the entire conversation regarding specific variables connected to what's actually at play. More
All kinds of dietary options have been presented, but few trace the path of food sourcing, farming methods, and recent preservation and safety concerns. Starting with the common potato, this book analyzes what might have gone wrong in recent years. This extends to a whole variety of foods including tomatoes, blueberries, onions, corn, and salad greens. Plus, most meats sold in grocery stores and served in restaurants -- gone wrong.

The bottom line is that the whole food system in America borders on many bizarre levels of conspiracy theory. This must be taken apart before dietary advantages can be understood and appreciated. Some things are so odd, who would believe it?

How does the U.S. FDA office work? What are labs analyzing when it comes to food safety? How is the general public protected? Because the statistics of illness seem to suggest that Americans are mysteriously growing more ill and dying younger than ever before in history.

This detailed analysis traces popular attitudes toward wellness and medicine back to the Roman Empire with candor, wit, and unusual insight. Americans spend triple on health care costs versus Japan with a four-and-a-half year lower life expectancy than Japan and many European nations. Why? And what's a probiotic?

Follow the path of conspiracy theory applied to food and medicine in ways that will make you laugh at the sheer absurdity. Laughter is good medicine because conspiracy theory says the system is designed to generate illness and the question is: Are you and loved ones next?

Scott W. Webb graduated from Wheaton College, Chicago, 1981 with a degree in philosophy. He is the father of two grown children, Art and Maddie, and grandfather to two, Kaden and Hannah. He worked for the Anchorage Daily News in Alaska for seven years before moving to Nashville, Tennessee in 1990 after his wife signed a developing artist deal with Star Song Communications and then with Curb Music. In 2000, he became interested in "health and wellness" and opened a private colon hydrotherapy office in 2001, where he is in his 14th year. In 2006, he wrote the book, "Inside Poop," about his experiences and learnings as a colon hygienist, which has a five star rating on Amazon. He has authored other books on a wide variety of topics and been published in ACRES USA and Massage magazine.

His other interests include history, gardening, raising chickens, and a wide range of home fermentation projects.

Reviews of The Conspiracy Theory Diet by Scott Webb

I've always considered myself a healthy person. I'm very conscious of my diet and eat mostly raw organic foods. But somewhere in the back of my mind has always been this feeling like there's a missing puzzle piece that I need to know. I feel as though I just stumbled on the secret of it all and to say I feel relief is an understatement. Scott Webb articulates the problem with empathy while identifying the cause of the issue, then presents the answers in a way that seems as though you already knew it. That's because these answers are realistic and practical to apply to everyday life. But I do feel slightly challenged in some ways, because I didn't realize that simply living in America provided such a threat to one's health and wellbeing. so I write this review as a disclaimer to prep you for a serious look in the mirror, because I'm sure you found this book the same way that I did: you're ready for someone to tell it to you straight. Good luck on your health quest, treat this book as a manual and map to getting through the unforgiving terrain of our now-poisoned world.

You have subscribed to alerts for Scott Webb.

You have been added to Scott Webb's favorite list.

You can also sign-up to receive email notifications whenever Scott Webb releases a new book.