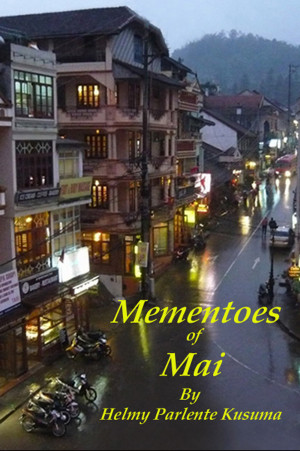 Helmy Parlente Kusuma was born and raised in Palembang, Indonesia.

As a young adult he has spent a decade and a half continuing his studies and working in Information Technology in Jakarta, the capital of Indonesia, while strategically plotting for total world domination.

Helmy anticipates the early completion of his fantasy novel.

Reviews of Mementoes of Mai by Helmy Kusuma

Overall Feedback: A feelgood story about the coming of age of a young man who risks it all to get what he wants. Written by an author who obviously has English as a second language but not as bad as one might think. With proper editing this one will take off.

Point of View: First person, you are a man in search of love and happiness on a journey that will take you to exotic lands.

Voice: Not as rich as I expected but shining none the less.

Character Development: Rich and deep development for a fictional memoir.

Dialogue: Because of the language issue the dialogue suffers a bit.

Pacing: Due to the language barrier the pacing suffers a bit but if you can ignore the small issues the story finishes well.

Setting: Exotic lands , love and happiness. Dreams for us all.

Continuity: Due to language issues you may have to redirect a few times.

Written by a writer for whom English is not his first language, this novelette reads rather like a piece of autobiography. Although Helmy is writing in a language which is not his native tongue, he has a better grasp of idiom, grammar, spelling and sentence structure than a lot of indie authors who claim English as their mother tongue. That's not to say there are no errors; there are slips in tense, structure and word order. There are occasional odd characters (textual rather than fictional) scattered amongst the words, suggesting that the conversion from a PC document to the format needed for an ebook has not been totally successful. But I'm nit-picking. The story has a charm and innocence about it that drove me to finish the book in spite of its slight deficiencies. It is a coming of age tale, a story of personal enlightenment and epiphany.
Some of the language borders on the poetic and Helmy paints word pictures that are both evocative and instructive. I feel I now know a great deal more about his homeland and those places he visits in the pursuance of his dream, and, more importantly, my wish to visit these places has grown stronger.
The philosophical asides chime well with the narrative and rarely come across as author intrusion, since they seem to come naturally from the mouth of the viewpoint narrator.
I enjoyed this story. It is a good book in search of an English speaking editor to make it into a very good book. But, even as it stands, I can recommend it as a gentle and feelgood read.

Mementoes of Mai is a relatively simple, personal and very genuine feeling work. The length puts it somewhere between a long short story and a short novel. The length works well for the story. The events feel very ‘real’ and the protagonist and narrator (Helmy) shares his name with that of the author. But the book is listed as ‘fiction’, so I suspect it is a fictionalized story but based heavily on real events in the author’s life.

The story is set mostly in Vietnam, but also has some events in Indonesia. I have never been to either place and the glimpses of those cultures presented in the story were very interesting to me (My favorite TV show is “Bizarre Foods” – not because of the food, but because of the glimpses of culture that show presents. This book worked in a similar way).

There are no murders, spies, monsters or other sensational elements, so if you’re looking for something like that, this may not be your thing. But if you’re looking for a simple, personal story with elements that touch on the real drama that we experience in our lives, and if you enjoy learning about and experiencing other cultures, I’d highly recommend it.

This is an interesting short story that reads a little like a travel diary which is a novel idea. It is about taking chances and not always receiving the outcome you expect.

The descriptions of the sights and sounds were so vivid I felt like I was really there and this I enjoyed. I have never been to Vietnam and to be taken on a journey around the different markets and foodie places was great.

Unfortunately for me the story didn’t flow very smoothly. I understand that English is not the authors first language and I commend him for writing a story thusly. Some of the conversation seemed either forced or stilted in parts. That being said with some clever editing this could be a really lovely travelogue type short story.

To me, this was part travel log, part food review and part nostalgic glance back over the life of a young man making decisions on life. The book took me to another place, filled with new sounds, a different language (I liked the touch of a dictionary at the back), new smells, different traditions, new foods and various scenery. It often made me hungry or gave me itchy feet to jet off somewhere. The pace of the book is quite leisurely and the main character drifts along, remembering his experiences and trying to make sense of everything that is happening around him. On his search for his ‘true love’, he discovers many things about himself, his values and what he really wants.

If you're looking for a slow paced story of love and life, you might enjoy this. The story basically showed how making plans for your life don't always work out the way you want them to. It was apparent that the author's english is a second language as a few words felt like the wrong version used and there were a few misspellings thus the 3 stars.

This was a totally different read for me, although i have to say i found it thoroughly refreshing.
It is written as an excerpt, of the main characters life and how he coped with emotion and the dawning realisation of how life doesn’t always work out the way you want it, therefore having to turn in another direction and succeed.
I found the whole story very sweet, natural and sometimes sad. I loved the descriptions the author used, making me feel that i could actually taste and smell the things he was describing.I thought this was extremely well done considering English is not the author’s first language.
To conclude, the book isn’t a page turner nor is it fast paced. It is simply a relaxing, sensitive read.

You have subscribed to Smashwords Alerts new release notifications for Helmy Kusuma.

You have been added to Helmy Kusuma's favorite list.

You can also sign-up to receive email notifications whenever Helmy Kusuma releases a new book.