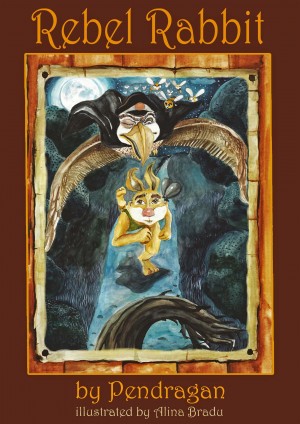 Rebel Rabbit - A Legend is Born

They launched Pendragan Publishing as an independent, international publishing platform for storytellers around the world. If you would like news about forthcoming publications, or books in the works, or if you have questions about any of the characters, please let us know.

Dragan started writing during the war that broke up Yugoslavia in the early '90s. Living in England with his one-year old son at the time, Dragan wondered how he could help his people in Croatia. The solution turned out to be magic! Dragan founded a theatre charity called Rise Phoenix, wrote his first puppet play for children, created his own puppets, and together with a bunch of troubadours, jesters and jugglers, drove a truck down to the war zone. In 1993, "Peppe the Magician" began to appear in refugee camps throughout Croatia, Bosnia and Kosovo. Small puppets and theatre plays gave way to giant puppets and theatre spectacles. Children who had lost everything rediscovered the ability to laugh. Adults slowly joined in. One Croatian soldier shouted from the audience, "Croatia needs puppets, not guns!" Quentin Blake agreed and gave permission for Rise Phoenix to take his Big Friendly Giant to the war zone. Dragan went on to write and perform in many other children's plays, quite a few of which are now stories and novels. When not writing, Dragan teaches at The Artisan Bakery School, and continues to perform as the magician Sol Ray.

As a child, Penny would row ashore to school from the sailing boat she grew up on with her family. This gave her a quirky view on life, encouraged by the stories she heard from blue-water sailors arriving in Falmouth Harbour. Penny grew up with a hunger for distant horizons and foreign shores. Her explorations took her to Europe, Africa, South America, Asia and even Antarctica. But her biggest adventure, which was falling in love with a Croatian magician (Dragan), happened right on her own front door step in England! So far, their story includes building their own woodfired oven for The Artisan Bakery School, moving to a crazy old cottage in Devon, taking an Invisible Man to Singapore, working with children in Sri Lanka and India and kayaking round the islands of Dalmatia. Penny also runs a professional copywriting, editing and translation business. She and Dragan write together to celebrate the magic that happens in real life.

You have subscribed to alerts for Pendragan.

You can also sign-up to receive email notifications whenever Pendragan releases a new book.