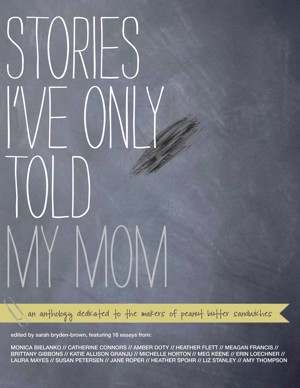 Stories I've Only Told My Mom

By Sarah Bryden-Brown
Rated 4.50/5 based on 2 reviews
An anthology of 16 original and personal essays by 16 leading women bloggers who explore with warmth and honesty profound experiences they've shared with their moms (or wish they had); some funny, some sad but each revealing the wisdom that lies within the makers of peanut butter sandwiches. More
Stories I've Only Told My Mom

16 essays by 16 of the best bloggers about the makers of peanut butter sandwiches.

Sarah Bryden-Brown is a mom of two, Lucy and Monte, and has spent 15 years in the media as a journalist, editor and author.

She has been editor of Family Circle and donna hay magazines, a journalist, editor and columnist on The Australian newspaper and a columnist for The Sun-Herald newspaper.

In 2003 Sarah published her first book, The Lost Art of Childhood (Random House), followed in 2007 with her second non-fiction title, Dad and Me (Harper Collins).

Sarah made the switch to online media in 2006 when she joined kidspot.com.au's executive management team as Director of Content and Community, contributing to the fast-paced growth of the start-up that resulted in kidspot.com.au becoming the #1 parenting site in Australia within six months. Kidspot has remained the #1 website for Australian moms for the past five years.

Sarah joined babble.com's New York based leadership team in fall 2009 and was VP content and community until 2011, growing its organic audience from 1M users to over 6M in 2011.

She left to start Blogstar, a venture that publishes bloggers collective work via ebooks.

Beautiful, moving, heart wrenching. As a mother of 6 (4 daughters, 2 sons)and grandmother of 22 (13 granddaughters, 9 grandsons)each of these stories touched me in some very personal way. Thanks for opening your hearts and sharing such personal stories in a way that was both respectful and affirming of the bonds between mothers and their children.

Well written and composed collection of stories. The mother/daughter relationship can be complex as the women here do an excellent job of capturing.

You have subscribed to alerts for Sarah Bryden-Brown.

You have been added to Sarah Bryden-Brown's favorite list.

You can also sign-up to receive email notifications whenever Sarah Bryden-Brown releases a new book.