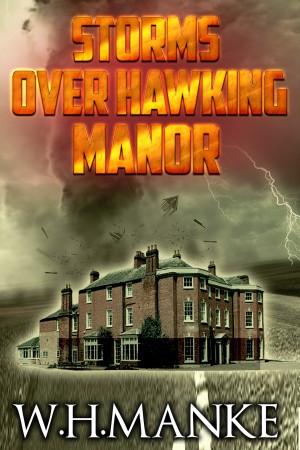 By W. H. Manke
The Carstairs clan's one known enemy, Eugene, is condemned to a penal colony as a murderer, but his threats of revenge remain. On the voyage there it is reported he jumped overboard in the Indian Ocean. Unknown to the Carstairs others also plan revenge, robbery, kidnapping and murder against them. Will the Carstairs brothers be able to defend the family from the coming raging storms? More
In "Storms over Hawking Manor" we meet many of the characters of "Secrets of Hawking Manor once more. In this novel dealing with events taking place a decade after "Secrets of Hawking Manor" their lovers and enemies of years gone by come back to haunt them in struggles that could spell doom for the Carstairs clan, a noble English family.
Henry and Benjamin Carstairs have testified against Eugene Fairham. Henry's former friend and fellow Dragoon who shot and killed their young friend, Christopher, stands trial before a ruthless judge. Condemned to hang, Eugene only finds mercy when Henry and Benjamin intercede for him at the last moment. While he escapes the hangman, he is banished to the penal colony of Australia and is forever forbidden to return to the land of his birth. On the way on board the Fortune Four Eugene manages to deceive another traveler. He takes his identity and reports Eugene Fairham to have gone overboard. The Carstairs learn that he has drowned in the vast Indian Ocean, but in reality he is on the way to wed the woman, a landowner in the Swan River Colony, the man he had deceived had promised to marry in an arranged marriage. Will the final words of the judge to him, "Eugene Fairham should you ever set foot on England's fair soil again, henceforth know you this, you shall receive mercy no more," deter Eugene from plotting revenge on the Carstairs?
Meanwhile back in England, the Carstairs face many challenges and dangers from noblemen as well as gangsters who are bent to visit revenge, robbery and murder on them. Desperate men plan to kidnap Jane, the young girl adopted by the Carstairs and her young brother. Not only are Benjamin and Henry Carstairs' skills and bravery tested, but Meredith and Samuel, their parents' lives are threatened as well.
After many of the storms assailing the Carstairs have passed, they celebrate the marriage of Clarissa and also Benjamin's betrothal to Rebecca, Lady Lydia's beautiful daughter. They are convinced they have weathered all storms, but unknown to them Eugene had quietly returned to his ancestral home.

If one had to describe Werner Manke in five words the most appropriate words might be being passionate about many things.
Manke's family, faith and health rank at the top of his list. He enjoyed a career in education as teacher, principal and Director of Instruction, and retired after thirty years to have time to pursue other interests. The years in education taught him much about how humans learn. Day-to-day observations, common sense and a good deal of research gave him an understanding about what it takes for people to be successful. He holds a degree with concentrations in English and Education and a Master's degree in Educational Administration and Strategic Planning. Ask him what he enjoys doing since retirement he’ll tell you, "Ranking at the top with other activities I love to watch my grandchildren at play, to read and to write. In the last few years I completed five full length novels, published two, and I've recently completed writing Storms over Hawking Manor, a sequel to the first novel I published, Secrets of Hawking Manor." The later book he edited and formatted at the end of 2014 for Smashwords' distribution to publishers and retailers that sell E-Books. He had also written a number of articles, short stories and many poems during those years.
When he is not near his grandchildren he might be found writing, researching or reading. He loves to play, coach and watch a number of sports that include soccer, hockey, skiing, fishing as well as collecting. He delights in the beauty of nature and the arts. Certain types of paintings and poems and the lyrics and melodies of some songs and hymns cause him to marvel at people's talents. He continues to study history. Ask him why he does, he will say, "We can make this a better world, if we consider the actions of individuals and countries of the past, good and bad, that history shows us and include that knowledge in our guidebook to roads not yet taken."
He believes humans are the crowning work of creation, sees each person as unique, one of a kind, priceless and able to achieve the greatest deeds as well as sink to the most hideous crimes. He believes our most urgent task is to guide all children to become compassionate, confident and informed citizen willing to take on the challenge to create a peaceful world where no child goes hungry.

You have subscribed to alerts for W. H. Manke.

You have been added to W. H. Manke's favorite list.

You can also sign-up to receive email notifications whenever W. H. Manke releases a new book.