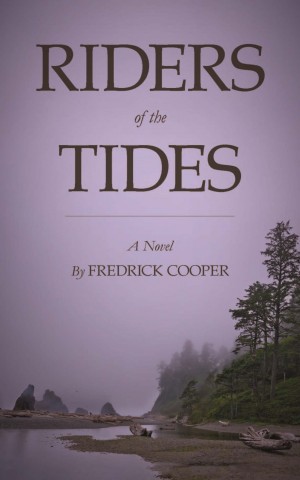 Riders of the Tides

By Fredrick Cooper
Riders of the Tides is one lively and exciting adventure after another in two time periods – the 1850’s and present day. It is a wonderful tale blending historical events of the Oregon Territory, compassion for the plight of Native Americans during the time of Manifest Destiny, and a family saga. More
When the facts of a murder do not lead to a culprit people love to hypothesize and, if the creative stars are aligned, an exciting story is born. Such is the case with Pacific Northwest author Fredrick Cooper and his book, Riders of the Tides, a vivid novel that masterfully entwines a 150 year-old murder case with the present and delivers a stirring read.

Riders of the Tides is a family saga set in the Pacific Northwest, filled with adventure and mystery. Real life pioneer Ben Armstrong was one of the 44 men who petitioned the U.S. Congress to form the Washington Territory and was murdered. Due to a lack of evidence, the case was never solved.

Riders of the Tides begins with Ben, who he was and how he died. The story then leaps to the present where some of his personal belongings find their way to one of his descendants, Earl Armstrong, a tribal forester. Earl begins a journey into the past in hopes of solving the mystery but during his pursuit of the truth he angers someone also linked through time to Ben and his demise. Will Earl end up meeting a similar fate to his great, great grandfather?

Riders of the Tides seamlessly weaves together past and present, nature and humanity, Native American spiritualism and family. The entire novel is written beautifully, each character and scene so vibrant they become cinematic in the reader’s imagination. Historical fiction lovers, mystery connoisseurs, residents of the Pacific Northwest, those enthralled with the building of the Oregon Trail and the New West, all will relish every word of this captivating book.
Available ebook formats: epub mobi pdf rtf lrf pdb txt html
First 20% Sample: epub mobi (Kindle) lrf more Online Reader
pdb
Price: $1.99 USD
Buy Add to Library Give as a Gift
How gifting works
Create Widget
Tags: manifest destiny oregon territory pacific northwest history
About Fredrick Cooper

Fredrick Cooper is an award-winning author, environmental engineer, a native of the Pacific Northwest and a member of the Shoalwater Bay Indian Tribe. In addition to being a writer, he spends his spare time on his boat cruising in Alaska and British Columbia or in his workshop where he expresses his creativity through traditional Native American woodcarving. He is a member of the Pacific Northwest Writers Association and Oregon Authors and currently working on a second sequel to his Earl Armstrong series. His debut novel, Riders of the Tides, was recognized with: a 2013 IPPY award for Best Regional Fiction: West-Pacific Region; a 2014 Beverly Hills Book Award finalist in the new fiction category; and Honorable Mention in the 2014 Hollywood Book Awards General Fiction category.

Reviews of Riders of the Tides by Fredrick Cooper

You have subscribed to alerts for Fredrick Cooper.

You have been added to Fredrick Cooper's favorite list.

You can also sign-up to receive email notifications whenever Fredrick Cooper releases a new book.