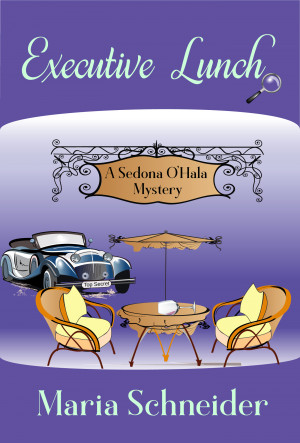 By Maria E. Schneider
Rated 4.33/5 based on 6 reviews
Sedona is given the opportunity of a lifetime: play an up-and-coming executive with all the trappings of wealth with someone else footing the bill. The catch: find out who is stealing company funds before the criminals find out that their program is being debugged.

Sedona runs into danger, the corporate glass ceiling, and an occasional chance at romance in her quest.

About the Series: Sedona O'Hala Mysteries

I really enjoyed this book. The storyline was original, the characters were well-developed, and the ending was both logical and still a surprise.

Some of the plot elements nearly go over the top, but that's not unusual in a "cozy mystery."

This is a good, quick read. It's not the kind of literature that will change the world, but it was a welcome diversion from reality for me.

Sedona thinks it's just another boring day at Strandfrost, as she goes about her normal activities. And it is a boring day....until she accidentally stumbles upon a mugging happening right there in the hallway! A six-inch switchblade, a shady director, some seedy characters sprinkled in, and suddenly Sedona is unwittingly thrown into the role of "bait" so management can solve a crime of embezzlement going on right under its nose.

"Executive Lunch" by Maria E. Schneider is a combination of a few of my favorite genres; it's chick lit with a little "cozy" thrown in. The main character, Sedona, is someone you can't help but like. She's reminiscent of some of our favorite hapless female heroines; accidental sleuths (with an edge) who somehow stumble right into the thick of things. She's joined by Huntington (whose motives initially seem unclear), Turbo (always there when you need him...well, except when you *really* need him), Marilyn (a bigger part of this than even she knows), and the rest of the interesting characters that make up this cast.

Although I liked the overall plot and I was eager to read to the ending, I have to admit to being confused by some of the transitions. I had to reread some action scenes to get a grasp on who was doing what, and several times I was surprised to see a character start speaking when I had no clue that character was even in the vicinity. Upon looking back, I'd sometimes see that the character was introduced by not being introduced- in the excitement of the moment, Sedona recognized that body/face/shape/walk, and then we'd find out in the next chapter who it was because he or she would start speaking. I am all for tension building to end a chapter and I think it's a great technique to build suspense, but it seemed that a great deal of the moments in the story were introduced this way. After a quick-moving beginning, the story slowed down and sagged a bit in the middle, and I began to wonder if we were still heading in the direction I thought we were heading. It seemed to meander a bit before it picked up again, drawing me in once again.

Overall, I would recommend this story. It's a quick, fun read, and the characters are nicely developed, which makes them interesting. You look forward to seeing what they'll do next, and who they'll do it with. You want to follow them into their next adventure, which, luckily for us, is already available in the next story in the series, Executive Retention. I give it 3.5 stars, which rounds up to 4 here.

Executive Lunch is a delightful and engaging book! The plot had plenty of surprises, with excellent attention to technical details without going over the top. The dialogue was realistic and humorous and the entire book just flowed very well, it was hard to put down. The characters were well developed; Sedona is adorable and I love her interactions with her family and friends. She stands up for herself and her antics had me laughing out loud on several occasions!

There is a lot happening in this fast paced book. It hits the ground running right from the first sentence and really never comes up for breathe. There is a good mix of action and fun with a few laugh out loud moments.
Even the fact that I worked out a lot (but not all) of the solution before Sedona did, didn't spoil my fun.
It's always nice to give a book a good review. It's even better when the book's author is someone you know and like. I'm looking forward to reading more of Sedona's adventures.

A very funny read and Sedona is an attractive heroine always falling in and out of trouble. A good mix of humour, crime and romance. Well worth reading.

Strandfrost is a very ordinary computer company located in a fourteen-story office building outside the downtown area of quiet Denton, Colorado--an unlikely spot for a mugging. And Sedona O'Hala leads a very quiet life in one of its testing labs, that is, until she comes to the attention of the board, after foiling an attack by three thugs. Admittedly she had attended self-defence classes, but she had never expected to have to use her skills in real life.

As a result of her successful bravado, Sedona is given the opportunity of a lifetime: play an up-and-coming executive with all the trappings of wealth with someone else footing the bill. The catch: find out who is stealing company funds before the criminals find out that their program is being debugged. Sedona runs into danger, the corporate glass ceiling, and an occasional chance at romance in her quest.

EXECUTIVE LUNCH struck a chord with me. Not only is it full of humour, many of you will also be aware that I work for a "computer company", and I could imagine how some of the scenarios in this story could work in the real world. It is a light read, enjoyable, but at the same time a puzzle to be solved, and Schneider does a pretty good job of tying off the threads.