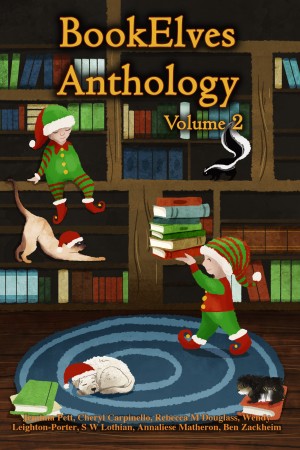 *Can Shirley Link's friends help her discover the joy of Christmas by setting her a puzzle only she can solve? Ben Zackheim (Shirley Link Detective Series, the Camelot Kids)
*Max the talking Tonkinese cat has an unpleasant surprise when he finds himself trapped in the attic one night. Will he escape the clutches of the Christmas fairy, a regiment of soldiers and three obstreperous French hens in time to enjoy a holiday with his family? Wendy Leighton-Porter (The Shadows from the Past series)
*Will Melvin Finklestein manage to impress the snooty Trixie Tragik with his Popcorn Surprise, or will the wicked Jasper Jollywood ruin his latest invention? S W Lothian (The Quest series, Time Square series)
*How can an overweight guinea pig save Santa's lost reindeer and hide him away long enough to regain his ability to fly? Jemima Pett (The Princelings of the East series)
*Halitor can't find the people who need his help on the long night of Midwinter. But they find him, and there may be some holiday magic in the air. Rebecca M Douglass (The Ninja Librarian series, Halitor the Hero)
*Once this warhorse carried a mighty king; now he carries a cargo more precious - the young girl destined to be his queen. Cheryl Carpinello (Young Knights of King Arthur series, Guinevere of Camelot)
*The Witch War is over, but the scars of their spells still cause havoc in Werifesteria. When Jacob's father is taken by the witch of the Dark Wood, Jacob and King Aldridge set out to return him. A fun fairy tale by Annaliese Matheron (Ninja Nan series)

Each tale weaves its own seasonal magic. Each magician has already warmed the hearts of thousands of young readers with their stories. Enjoy these frantic races to meet the Christmas deadline while you curl up in your favourite reading spot this winter.

The authors hail from US, UK, Australia and France; stories use UK or US English spelling.

Jemima Pett has been living in a world of her own for many years. Day-dreaming in class, writing stories since she was eight, drawing maps of fantasy islands with train systems and timetables at ten. Unfortunately no-one wanted a fantasy island designer, so she tried a few careers, getting great experiences in business, environmental research and social work. She finally got back to building her own worlds, and wrote about them. Her business background enabled her to become an independent author, responsible for her own publications.

Her first series, the Princelings of the East, mystery adventures for advanced readers set in a world of tunnels and castles entirely populated by guinea pigs, is now nearing completion. The tenth and final book, Princelings Revolution, is set for publication in 2020. Jemima does chapter illustrations for these. She has also edited two volumes of Christmas stories for young readers, the BookElves Anthologies, and her father's memoirs White Water Landings, about the Imperial Airways flying boat service in Africa. She is now writing the third in her science fiction series set in the Viridian System, in which the aliens include sentient trees.

Jemima lives in a village in Norfolk with her guinea pigs, the first of whom, Fred, George, Victor and Hugo, provided the inspiration for her first stories, The Princelings of the East. She is now writing science fiction for grown-ups, hatching plans for a new series, and writing more short stories for anthologies.

About the Series: MG BookElves

This is an excellent collection of festive tales, which are even better than those in volume one of the Book Elves anthologies.