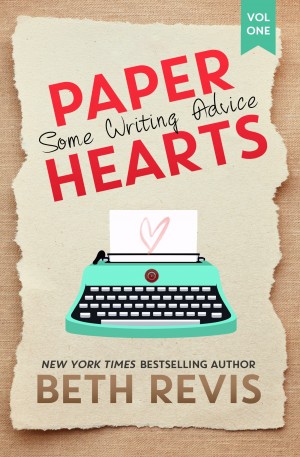 By Beth Revis
Practical advice meets real experience as NY Times bestselling author Beth Revis speaks on writing. A combination of philosophy and hands-on activities, this book is perfect for the aspiring author. Save the Cat meets Bird by Bird in the first of three volumes on writing, publishing, and marketing. More
Bird by Bird meets Save the Cat in this new writing advice book by NY Times bestselling author Beth Revis. With more than 100000 reads on Wattpad for the previous edition, this newly expanded and rewritten edition features 350 pages of content, including charts and a detailed appendix.

Your enemy is the blank page.

When it comes to writing, there’s no wrong way to get words on paper. But it’s not always easy to make the ink flow. Paper Hearts: Some Writing Advice won’t make writing any simpler, but it may help spark your imagination and get your hands back on the keyboard.

With information that takes you from common mistakes in grammar to detailed charts on story structure, Paper Hearts describes:

-How to Develop Character, Plot, & World

-What Common Advice You Should Ignore

-How to Develop a Novel

-The Basics of Grammar, Style, & Tone

-How to Get Critiques and Revise Your Novel

-How to Deal with Failure

BONUS! More than 25 “What to do if…” scenarios to help writers navigate problems in writing from a NY Times Bestselling author who’s written more than 2 million words of fiction.
Available ebook formats: epub
Price: $5.99 USD
Buy Add to Library Give as a Gift
How gifting works
Create Widget
Tags: publishing grammar how to write writing advice how to publish story structure structure a book advice about writing how to write a novel book
About Beth Revis

Beth Revis is the New York Times, Publisher’s Weekly, and IndieBound bestselling author of the Across the Universe series(Razorbill/Penguin ), as well as several in-world short stories published in various anthologies. The books are currently available in more than 20 languages.

The Across the Universe books blend mystery with science fiction as they follow the voyage of a generation spaceship to a new world fraught with danger. The first book in the trilogy, Across the Universe, is a “cunningly executed thriller” according to Booklist, and the second book, A Million Suns, was hailed by the LA Times as “a fast-paced, action-packed follow-up.” Shades of Earth, the final volume, was called a “tense and delicious ride” by The Examiner.

Across the Universe was selected as a YALSA Teen Top Ten novel, recipient of the Seal of Excellence and the Futuristic Novel of the Year Award from Romantic Times, long-listed for the Carnegie Medal, and featured on several state reading lists. The second book in the trilogy was selected as a Kirkus Best of 2012 novel and a Best Book of 2012 from Wired Magazine, and the third book was featured as a Book of the Month from Seventeen Magazine and an Indigo Must-Read Novel.

A former teacher, Beth lives in rural North Carolina with her husband and dog. Currently, she is working on a new science fiction title for self publication and two forthcoming novels for Penguin/Razorbill.

Beth is represented by Merrilee Heifetz at Writers House.

You have subscribed to alerts for Beth Revis.

You have been added to Beth Revis's favorite list.

You can also sign-up to receive email notifications whenever Beth Revis releases a new book.