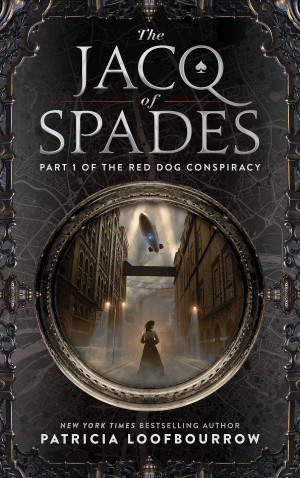 The Jacq of Spades

Rated 4.67/5 based on 3 reviews
1899 years after the Catastrophe, the city of Bridges is run by the Mob. Private eye and mafia wife Jacqueline Spadros turns down a case too hot to handle - that is, until the scoundrel stalks her. More
A boy vanishes. But not just any boy.

1899 years after the Catastrophe, Bridges is owned by the Mob. As the city's steam-driven infrastructure fails, a new faction rises: the Red Dogs.

Jacqueline Spadros is haunted by her best friend Air's death, killed as he tried to stop her sale to the Spadros crime syndicate ten years ago. Now in an unwilling marriage to the city's biggest drug lord, she secretly runs a small-time private eye business to earn enough money to escape.

Air's little brother disappears from his back porch. And now someone is following Jacqui.

The Jacq of Spades is the first chapter of the Red Dog Conspiracy steampunk crime family saga.

My vision for Red Dog Conspiracy is that there is a yet undiscovered gender-flipped detective noir miniseries set in a future world - a steampunk dystopia under a dome in the heart of the former US. This series tells that story.

Lovers of Downton Abbey, Game of Thrones, Bosch, or the Sherlock Holmes mysteries will enjoy this debut novel of the Red Dog Conspiracy series from "The Queen of Steampunk Noir" ....

What readers say about The Jacq of Spades:

"... a world of family intrigue combined with feuding households across the four quadrants of Bridges..." June Lorraine Roberts, Murder In Common

"This was the first steampunk book that I've read that I actually really loved." Gabby's Honest Book Reviews

"For rich pageantry and a complex culture navigated by a character who feels she’s balanced on the edge between the slums of the Pot and the extravagance of the families, The Jacq of Spades is a hands-down success." Margaret Fisk, Tales To Tide You Over

"... good read for anyone who likes mystery and suspense mixed with science fiction." The Beautyful Word

The Jacq of Spades is part 1 of a 13-part serial novel:

The Jacq of Spades

Patricia Loofbourrow, MD is an SFF and non-fiction writer, PC gamer, ornamental food gardener, fiber artist, and wildcrafter who loves power tools, dancing, genetics and anything to do with outer space. She was born in southern California and has lived in Chicago and Tokyo. She currently lives in Oklahoma with her husband and three grown children.

About the Series: Red Dog Conspiracy

1899 years after the Catastrophe, Bridges is run by the Mob.

The Red Dog Conspiracy follows the story of 22 year old small-time private eye Jacqueline Spadros beginning from her first major case: the missing little brother of her best friend, whose murder ten years before still haunts her nightmares. The only clue? A Red Dog stamp across the alley from where the boy was last seen.

Dodging the man - seemingly mad - who has publicly threatened her life, placating her brutal, sadistic father-in-law, dealing with her feelings about her ex-lover Joseph Kerr, while being married to one of the city's biggest drug lords: Jacqui is a busy woman. Her life is about to get much busier. From the very first page, Jacqui is dragged into a web of lies, secrets, and betrayals which both endangers her life and the lives of those she loves.

Bridge is an isolated domed city divided into four quadrants each of which is controlled by a crime family who manufactures and distributes a drug known as “Party Time”. Each of the four quadrants contains affluent areas, areas known as the “pot” which are areas of the city that were destroyed during previous warfare between factions, and the slums where the very poorest people live. The crime families establish the economic systems for their quadrants and large portion of the population are starving. Large scale poverty and continual competition and mistrust among the families make Bridge a proverbial powder keg for violence.

One quadrant is ruled by the Spadros family. Jacqueline Spadros is the twenty-two bride of Spadros heir-apparent Tony Spadros. Jacqui was raised in the Spadros Pot in a brothel and she has a multitude of reasons to mistrust and detest Spadros patriarch Roy Spadros. She knows if anything happened to her husband, Tony, Roy would not allow her to continue as part of the family. Because of this, she has taken on a secret business of her own; that of private detective.

When Jacqui is contacted by a woman whose son, David, has disappeared she is surprised to learn that she knew the woman many years earlier and that the death of her older son plays a key role in Jacqui’s nightmares. Although the woman does not recognize Jacqui at first, Jacqui cannot resist trying to find David for his mother, partly to ease her own guilt left over from the death of the older boy.

What transpires is a mystery story of the first order in the best tradition of Sherlock Holmes. Jacqui is a young woman in a precarious position who must uphold a social image, deal with her husband’s and the family patriarch’s expectations, deal with inter-familial politics, run a household, find David and stay alive in her spare time. How she manages this is remarkable and makes a first-rate mystery story.

All of the characters are believable and the reader is left satisfied up until the end. Unfortunately, this book is a serial series; the reader must throw in another nickel for the next installment to achieve any satisfaction as far as finding out who did it. I am not a fan of serial series and strike the names of authors who use that method off my reading list. This story, however, is well written and well edited. I noticed no textual errors to distract me from the story.

The Jacq of Spades is an all-around excellent mystery story that should appeal to any lover of mysteries, crime action, or to fans of stories about life in dystopian cultures. The end is a letdown for those, like me, who think readers deserve to know who did it in the end. That of course is the nature of the serial series and that, alone, will cost it a star.

Thanks to the author for allowing g me to read her book in return for an honest review. Also thanks to Goodreads.

I really enjoyed this book which is very different from those I usually read. It's very historical fantasy based and I didn't think I was going to enjoy it as much as I have. I also like that a sequel is coming too. It took a little while to get going but after about a third of the way into the book, and once in had got used to the style of writing it became very enjoyable and interesting and I knew I definitely had to finish it to discover the ending. I thought I had worked out the villain of the book, but the end didn't confirm this person, one way or another, so for a second reason, I'm really glad their is another book on the way. The ending was a good one, it didn't just fizzle out, or stop, it led up to the big event, then carried out with some explanations.

If I had to criticise the book is any serious manner, it would be that, at times, it was way over the top on descriptions. Of people, their clothes, the surroundings, their homes, their pets. Everything had a really over the top description of it, and although you get used to it after a while, it did detract a little from the main characters actions and exploits.

I have deliberately avoided telling a synopsis of the story, as this is available on any website it is sold on, and also as I don't want to let any cats out of the bag by mistake.

Thanks again, Patricia, for allowing me to read your book. And I wish you all the luck for its success. Let me know when the sequel is finally published.

(reviewed the day of purchase)
ScifiandScary reviewed on on Nov. 13, 2015

In The Jacq of Spades Patricia Loofbourrow manages to spin a tale that keeps you guessing right up until the very end. There was always just enough uncertainty about clues to keep you slightly off-balance and make you doubt your conclusions. Add in the fact that the main character is an intelligent, strong woman who could drink more than a few men under the table, and you have a story that is almost irresistible.

Now, this novel is technically Steampunk, but its not heavily mentioned. There aren't a lot of cool gadgets mentioned, but there's talk of Inventors and the mechanisms that make the city work. I won't go into too much detail, just felt it was best to let the readers know that this wasn't a heavily fantastical story. This lack of obvious 'punkery does nothing bad to the story, though. Its mentioned at the appropriate moments, but you don't spend your time ooh'ing and aah'ing over gizmos because you're completely wrapped up in the mystery that's unfolding.

The Jacq of Spades hooked me immediately, almost against my will, and pushed me through a story that both captivated and puzzled me. I don't even have any major critiques worth mentioning in this review. That should tell you something.

Disclaimer: I received a copy of this book free from the author in exchange for an honest review.

You have subscribed to alerts for Patricia Loofbourrow.

You have been added to Patricia Loofbourrow's favorite list.

You can also sign-up to receive email notifications whenever Patricia Loofbourrow releases a new book.