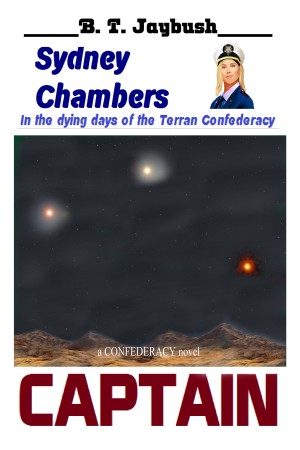 By B. T. Jaybush
Rated 4.00/5 based on 1 review
Sydney Chambers: the Navy’s brightest star until a superior’s folly brings a court martial down on her career. Though found innocent, she’s still tainted ... and though her Admiralty mentor salvages a captaincy for her, it comes with banishment to the farthest frontier system in the Confederacy. There she must face down pirates, armed with only with a ship recently salvaged from the scrap heap. More
Pirates + a frontier system + a rookie captain? Good times.

Sydney Chambers is the Navy’s brightest star until a superior’s folly brings a court martial down on her career. Though found innocent, she’s still tainted ... and though her Admiralty mentor salvages a captaincy for her, it comes with banishment to the farthest frontier system in the Confederacy. There she must face down two powerful bands of pirates armed only with a Navy ship recently salvaged from the scrap heap ... and only the vaguest idea of who her enemies are, or who her friends might be.
Available ebook formats: epub mobi pdf lrf pdb
First 20% Sample: epub mobi (Kindle) lrf more
pdb
Price: $2.99 USD
Buy Add to Library Give as a Gift
How gifting works
Create Widget
Tags: pirates female hero dying empire frontier system
About B. T. Jaybush

Brian Jaybush cut his teeth reading science fiction, starting with Asimov's I, Robot at age 10 and progressing insatiably from there. He has been writing all his life, starting as a journalist in junior high school and continuing with legal and technical writing later in life (BA History, 1975; Juris Doctor, 1978). Retirement from 30 years in the telecommunications industry has allowed him to concentrate on fiction writing full time, in partnership with his son, Timothy.
Timothy Jaybush also began reading and writing science fiction at an early age, leading to an uncanny ability to construct unusual and entertaining story lines. In addition to working full-time, Tim graduated from the University of Washington with a degree in Philosophy.

Learn more about B. T. Jaybush

About the Series: The Confederacy

A Terran empire in democratic disguise, centuries in the future. More than fifty worlds, managed (if not governed) from the Capital on Terra and controlled by the Terran Space Military (TSM). Though the Confederacy has, overall, been a positive step for humanity, its time is drawing to a close: corruption is rampant, bureaucracy reigns supreme, and even the TSM is having a hard time keeping things together.

Also in Series: The Confederacy

Reviews of Sydney Chambers: Captain by B. T. Jaybush

An entertaining read. A mixture of adventure and sci-fi.

Pirates are attacking freighters of the 16 Cygni system and killing anyone who dares to resist. Only 1 Terran Space Military warship was sent to quell the pirates.

Sydney Chambers is newly promoted to captain of the old but refurbished Cahan Morrigan and she's eager to prove herself after the recent court martial. Unfortunately she has to defeat 2 separate groups of pirates lead by: Patrick a modern day Robin Hood and the brutal Hans who is 3 steps ahead and wants to wreak vengeance on her.

This space military tale (albeit sans aliens) will definitely appeal to fans of Star Trek.

Spoilers ahead:
The references to sexual assaults of Krista were in my opinion irrelevant to the story. Too much focus was placed on the pirates' stories which was disappointing. I expected more focus on Sydney's journey as captain.
I read the books in order and found that a few pages were repeated verbatim from the First Officer book - thus deduction of 1 star.

You have subscribed to alerts for B. T. Jaybush.

You have been added to B. T. Jaybush's favorite list.

You can also sign-up to receive email notifications whenever B. T. Jaybush releases a new book.