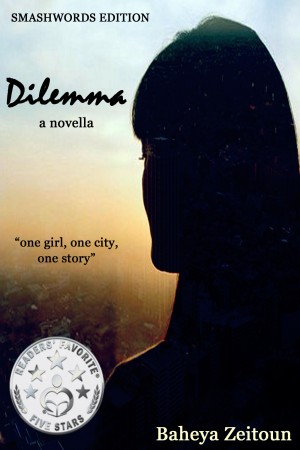 By Baheya Zeitoun
Rated 3.00/5 based on 1 review
She is caught in the middle of a love triangle for the first time in her life, but only desires one man. As he grows distant, she seeks comfort in the unlikeliest places. All the while, trying to manage her uncertain financial situation and her career. It is a contemporary tale about a young writer and the struggles of independence in a 21st century metropolis.
Download: epub mobi (Kindle) pdf more Online Reader
pdb txt
Price: Free! USD
Add to Library
Create Widget
Tags: friendship independence career artist youth writer city dilemma struggles relashionships
About Baheya Zeitoun

Baheya Zeitoun was born and raised in Cairo, Egypt. She is a city-girl to the core, who is inspired by the noise, chaos and liveliness of city life. She considers herself to be a feminist writer, and is usually inclined to write more realistic fiction with female protagonists. And while she dabbles in both poetry and prose, she feels she is better suited for prose.

From a young age, Baheya started creating stories. At first it was to amuse herself, but as she grew she found putting words on a page/screen to be quite a liberating experience. Reflecting primarily on her own experiences, and drawing from them to build her characters, she began to develop multi-layered narratives. She finds solace when she loses herself in a gripping book, and hopes to one day write a story that would translate that same experience to her readers.

Reviews of Dilemma by Baheya Zeitoun

Dilemma is an experimental literature novella that describes the life of a young everywoman in everycity over the period of a year. Created by Zeitoun from her own diaries, she tells her story in a third person perspective and has anonymised the both the characters and the city itself. I have seen this anonymity device come unstuck in other novels, but I thought here it worked well. The pared down cast and narrative line meant I was never confused as to who was the focus of the writing and the city, while being an important element in its own right, could be pretty much in any country. Zeitoun's novella is, of course, completely personal to her experiences, but at the same time manages to accurately illustrate the coming of age of thousands of women across the globe.

I appreciated witnessing She's personal growth from the first naive chapters where she defines her identity more by her potential partner than by her own self. Later She talks about transition and I felt that concept was the crux of this book. She cannot be comfortable as her own person until she learns what and who she really wants to be.

Dilemma is a gentle story and a quick read which was appealing in its simplicity. There is a smattering of proofreading errors which distracted me a little, but not overly so, and I enjoyed reading this story.

You have subscribed to alerts for Baheya Zeitoun.

You can also sign-up to receive email notifications whenever Baheya Zeitoun releases a new book.