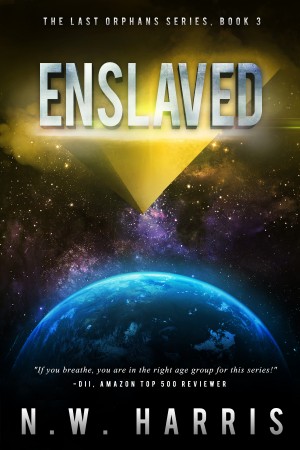 Shane and his friends survive the first major attack against the enemy, destroying the alien ships that came to harvest the children of Earth and turn them all into slaves. However, one ship escaped, and the aliens have captured Kelly. Shane will do whatever it takes to save her, but turning his back on his friends could jeopardize the whole mission.

The enemy invades Kelly's mind, turning her into a slave soldier. She'll follow their orders, even if it means murdering her friends, including her little sister and Shane. She is helpless, trapped inside her body while it performs heinous tasks under the direction of her new masters, while her sanity and desire to live fade.

Shane returns home to make a rescue attempt, only to find Kelly commanding an army of human slave soldiers, and she's determined to make him join her ranks. Will Shane save Kelly before she gets to her sister, or will she help the enemy enslave the rest of humanity?

Born at the end of the Vietnam war and raised on a horse farm near small town north Georgia, his imagination evolved under the swaying pines surrounding his family's log home. On summer days that were too hot, winter days that were too cold, and every night into the wee morning hours, he read books. He lives in sunny southern California with his beautiful wife and two perfect children.

About the Series: The Last Orphans

Take a deep breath before you start The Last Orphans Series. This action adventure series filled with cinematic science fiction action, end of the world apocalyptic events, and heart pounding thrills will leave you enthralled from beginning to end. Fans of The Hunger Games by Suzanne Collins and The Maze Runner by James Dasher will love this teen fiction series. With over 500 five-star reviews on Goodreads, this is definitely the series you should read next!

Also in Series: The Last Orphans

Reviews of Enslaved by N.W. Harris

You have subscribed to alerts for N.W. Harris.

You have been added to N.W. Harris's favorite list.

You can also sign-up to receive email notifications whenever N.W. Harris releases a new book.