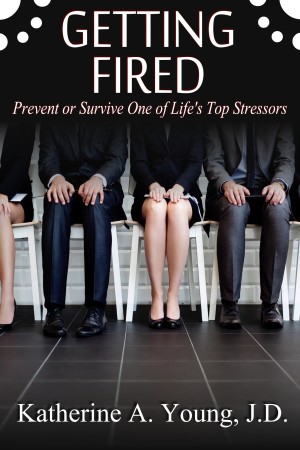 Getting Fired: Prevent or Survive One of Life's Top Stressors

By Katherine A. Young
Written by an experienced employment lawyer, Getting Fired provides tips and quizzes to check if your suspicion of a coming termination is off-base or all too real. Read client composites of typical scenarios of firing and a lawyer’s advice. Learn to avoid being pushed into a resignation, how to spot situations ripe for negotiating a severance, and other important strategies to come out on top. More
“Getting Fired: Prevent or Survive One of Life’s Top Stressors” is written by a plaintiff’s employment attorney. Tennessee attorney Katherine A. Young has met with or spoken to thousands of employees who have just been fired over the past twenty years. Her years of listening allow her to summarize and list the signs of danger to share with employees who are in fear of losing a job. The book explains the warning signs of an impending termination in layman’s language. Quizzes and reader self-evaluation allow the reader to determine if they may be in jeopardy of a firing and if so, how to prepare. Scenarios of real-life composite clients explain to the reader the typical situations that should tip off an employee that trouble is on the way. Young’s advice to the composite clients illustrate the important decisions that can be made so an employee ends up in the best possible landing position if a firing does occur. She offers guidance ranging from the practical (how to arrange your office space to deflect attention) to the strategic (evaluating the steps to become eligible for unemployment insurance benefits). Guidance on consulting with an attorney, documenting discriminatory or retaliatory treatment, negotiating severance packages, and leaving the job with dignity are all covered. “Getting Fired” will help employees plan and prevail over a tough situation that all too many Americans have experienced in the past decade.
Available ebook formats: epub mobi pdf rtf lrf pdb txt html
First 18% Sample: mobi (Kindle) lrf pdb Online Reader
Price: $3.99 USD
Buy Add to Library Give as a Gift
How gifting works
Create Widget
Tags: unemployment work problems job loss employment law fired from job discrimination in employment job termination job problems severance pay
About Katherine A. Young

Reviews of Getting Fired: Prevent or Survive One of Life's Top Stressors by Katherine A. Young

You have subscribed to alerts for Katherine A. Young.

You have been added to Katherine A. Young's favorite list.

You can also sign-up to receive email notifications whenever Katherine A. Young releases a new book.