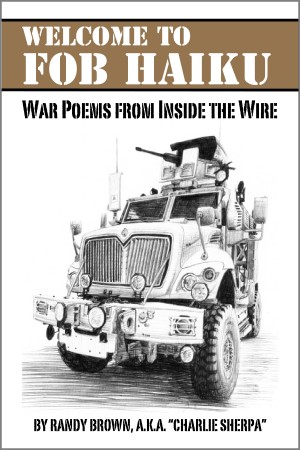 Welcome to FOB Haiku: War Poems from Inside the Wire

Here’s a taste of "FOB Haiku":

1.
I had hoped, I guess,
for something more like Starbucks,
not yellow water.

2.
We build our nations
one tea party at a time.
They serve, we protect.

Freelance writer and citizen-soldier by day, and secret (writing as "Charlie Sherpa") blogger by night, Randy Brown was preparing in 2010 to deploy as the sole "knowledge manager" for an Iowa National Guard unit of 3,000 soldiers. ("Historian, librarian, lessons-learned reporter—it was sexier to say my job was 'Brigade Staff Jester,'" he jokes.) After a paperwork snafu dropped him off the list, he retired with 20 years of military service and a previous overseas deployment. He then went to Afghanistan anyway, embedding with his former colleagues as a civilian journalist.

Brown was the 2012 winner of the Military Reporters and Editors' (M.R.E.) independent-blogging category, and a past finalist in the Milblogging.com awards' reporter (2011) and veteran (2012) categories.

He is the current poetry editor of Military Experience & the Arts’ literary journal As You Were.

Reviews of Welcome to FOB Haiku: War Poems from Inside the Wire by Randy Brown

You have subscribed to alerts for Randy Brown.

You have been added to Randy Brown's favorite list.

You can also sign-up to receive email notifications whenever Randy Brown releases a new book.