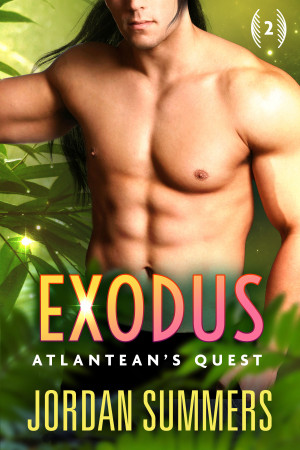 Jaclyn Ward was prepared for anything a jungle could throw at her. Anything but an encounter with a dark-haired, jade-eyed Adonis named Ares. Nothing on the planet could have prepared her for him. Ares knows Jac is the only woman strong enough to stand by his side. It will take all his skill as a hunter to catch her as two strong wills collide. In a game of domination there can be only one winner. More
Pistols…Check! Knife…Check! Bug spray…Check!
Jaclyn Ward was prepared for anything a sweltering jungle could throw at her. Snakes, spiders, mosquitos, she’d cut a swath through them all to find her missing friend, Rachel Evans. The last thing Jac expected to encounter was a dark-haired, green-eyed alien Adonis named Ares, whose passion and skills matched her own.
​
As the King's right hand, it's Ares's job to protect the Atlantean people from threats, including ones that come in an appealing feminine form. Since Jaclyn Ward is the Queen's friend, he can't harm her, but there's nothing to stop him from claiming her. Ares knows Jac's the only woman strong enough to stand by his side, but convincing her will take all of his considerable skills.
​
Sleeping with the enemy? No problem! Jac will do whatever it takes to complete her rescue mission. She can’t match Ares’ alien strength, but years as a corporate attorney has made her cunning and ruthless. Like so many other men, Ares has underestimated her and Jac plans to use that misstep to her advantage. In a game of domination, there can only be one winner.

“ATLANTEAN’S QUEST: EXODUS by Jordan Summers is one of the best books I’ve read in a long time. The writing is superb and the characters come to life on the pages.” Reader Views

“Ms. Summers is a magnificent author who writes with much flair and draws a story with her words.” Love Romances

“With sizzling sexual content, an action-packed plot and dynamic characters, this is a pleasurable fantasy that’s not to be missed.” Romantic Times BOOKreviews

“This second installment of Jordan Summers’ spicy twist on the legend of the Atlanteans is every bit as steamy, passionate, and full of intrigue as the first.” Romance Junkies

Jordan Summers is a New York published author, who has thirty-one published books to her credit and has sold over 150,000 ebooks. To learn more about her work go to: www.jordansummers.com

You have subscribed to alerts for Jordan Summers.

You have been added to Jordan Summers's favorite list.

You can also sign-up to receive email notifications whenever Jordan Summers releases a new book.