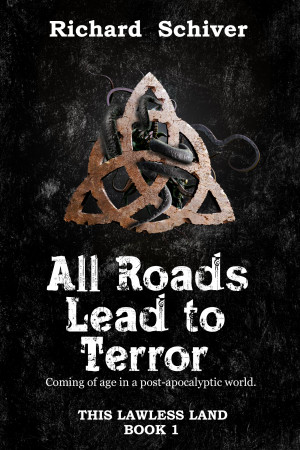 All Roads Lead to Terror

Four boys must put aside their differences and come together in a post-apocalyptic world to keep an evil force from taking over their world. More
In a chaotic, post-apocalyptic world, an endless night is closing in, and only the strong will survive. In the midst of the turmoil, fourteen-year-old Meat, and his three closest friends, embark on a mission to rescue kidnapped children from the compound enslaving them.

Battling their way through treacherous terrain and immeasurable odds, the boys must learn to lean on each other if they hope to survive. Little do they know fate has far greater plans for them. For they represent the trinity, a symbol older than time itself, that keeps the darkness at bay.

They are three, bound by a fourth, destined to save mankind.

With time running out, and the cloak of eternal night descending, can the boys find a way to turn the tables on evil?

About the Series: This Lawless Land 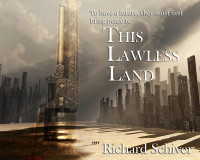 Welcome to a post-apocalyptic world where a child can be named Meat. A world of unrestrained brutality where death lurks around every bend, and the only law is the firepower one carries on their hip. It is into this world these four boys have been born. A world where cellphones, fast food, and supermarkets are fables from the past. A world where the dead walk, and humanity has strayed dangerously close to the edge of extinction.

Four boys have been drawn together to embark upon a journey. One of discovery, not only of the world in which they live, but of worlds that lie beyond imagination. Every journey begins with a single step, and their journey begins with a quest to Richmond where they will confront a cult of feral boys who worship a creature of the night. Along the way their friendship will become stronger as they come face to face with the brutality of a world without laws or consequence.

A journey that will lead them to the realization that they are the future, but to have one, they must first bring peace to this lawless land and confront the forces of evil arrayed against them.

Reviews of All Roads Lead to Terror by Richard Schiver