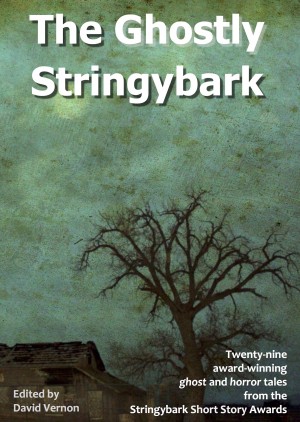 They find her body just after sunrise, floating among the mangroves with mud crabs in her hair. I watch as they drag her through the water and lie her down on the dead leaves, their dirty hands touching her lovely skin. My toes curl when I see her face; white and bloated and almost unrecognisable.
“Jesus Christ!” Mark says, as he takes in the state of her body. “Has to be a dingo.”
“Been no bloody Dingos around here for years,” his dad, Roy replies.
— from "Dark Water" by Lauren Noelle Rice

Two girls in black dresses stood guard on the edge of the pool. Lydia stared. Twins, maybe four years old, they stood still, their faces pale and their lips blue.
It was their blue lips that disturbed her the most.
No. It was that their eyes were closed.
Oblivious to the girls Jack picked up the handkerchief and stood up. He can’t see them. She trembled.
Their eyelids flickered. They were going to open their eyes.
— from "The Unknown Wedding Dress" by Sabina Wills

I was conceived by the rock pool where the fish kiss the ripples and the rays of the sun warm the granite outcrop that surrounds it. The rock pool is where my mother bashed my father’s brains out. The blood dribbled down — drip drip drip into the rock pool. Swirling and mingling, becoming one with nature. My father wasn’t the first person to die there. Mrs Alice Kelly was killed there on her honeymoon. They found her husband in a pool of her blood, a broken wine bottle in his hand, but they never found her.
The locals call it Honeymoon Pool.
— from "The Rock Pool" by McEleney

Listening to someone say they saw a ghost is a bit like hearing them, but not truly believing. In this collection of ghostly tales, twenty-nine award-winning writers have told stories of vastly differing experiences and all unnervingly credible. Stories such as Maree Teychenne’s I Know What I Hear, Dear Rita create a new and spine-chilling twist to ‘monsters under the bed’. Vickie Stevens uses a historic shot tower in Tasmania as a device to uncover strange occurrences. Roger Leigh delves into the realm of implants and technological horrors in I Can Stand The Despair. For most of us, thinking about ghostly habitats involves old buildings and graveyards, basically, man-made structures formed around European folklore. David Slade in The Wilangarra uses ‘old land’ in the ancient country Australians live and its spirits to tell the tale of Barra fishermen who go missing in ‘big salty’ country. So does Rachel McElleney in The Rock Pool, a lover’s trysting place where love turns decidedly dark. The four judges at Stringybark Publishing have put together an anthology of stories about the paranormal to line bookshelves along with thousands of books in this genre, but this offering sits next to what Australia does so well in films such as Snowtown, Wolf Creek, The Reef and Razorback—it unsettles the trusting reader.

Really enjoyed this whole collection. Many stories contain interesting and unexpected twists, with a whole range of treatments on the horror or ghost theme, with some stories more comedic and others aiming for a more serious, scary effect. Some of the ending twists were really quite shocking! Would recommend to anyone who was looking for an entertaining read. Suitable for all ages.