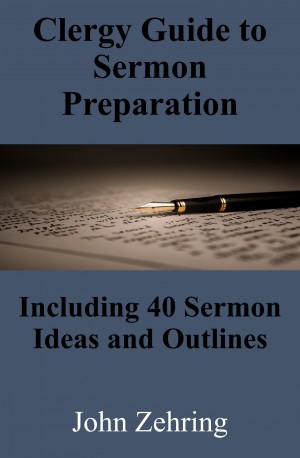 Clergy Guide to Sermon Preparation: Including 40 Sermon Ideas and Outlines

John Zehring has served United Church of Christ congregations as Senior Pastor in Massachusetts (Andover), Rhode Island (Kingston), and Maine (Augusta) and as an Interim Pastor in Massachusetts (Arlington, Harvard). Prior to parish ministry, he served in higher education, primarily in development and institutional advancement. He worked as a dean of students, director of career planning and placement, adjunct professor of public speaking and as a vice president at a seminary and at a college. He is the author of more than sixty books and is a regular writer for The Christian Citizen, an American Baptist social justice publication. He has taught Public Speaking, Creative Writing, Educational Psychology and Church Administration. John was the founding editor of the publication Seminary Development News, a publication for seminary presidents, vice presidents and trustees (published by the Association of Theological Schools, funded by a grant from Lilly Endowment). He graduated from Eastern University and holds graduate degrees from Princeton Theological Seminary, Rider University, and the Earlham School of Religion. He is listed in Marquis' WHO'S WHO IN AMERICA and is a recipient of their Albert Nelson Marquis Lifetime Achievement Award. John and his wife Donna live in two places, in central Massachusetts and by the sea in Maine.

About the Series: Public Speaking

Reviews of Clergy Guide to Sermon Preparation: Including 40 Sermon Ideas and Outlines by John Zehring

You have subscribed to Smashwords Alerts new release notifications for John Zehring.

You have been added to John Zehring's favorite list.

You can also sign-up to receive email notifications whenever John Zehring releases a new book.