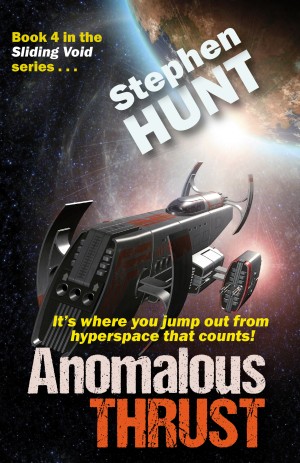 By Stephen Hunt
Captain Lana Fiveworlds might be flying with the same motley crew of misfits, but her problems are all-new. Lana believes that a demanding and difficult client on board her beloved starship - the Gravity Rose - is the sum of her woes. But that was until she has to emergency ditch inside a star system which holds a full range of deadly secrets. More
ANOMALOUS THRUST (Sliding Void book 4)

Captain Lana Fiveworlds might be flying with the same motley crew of misfits, but her problems are all-new.

Lana believes that a demanding and difficult client on board her beloved starship - the Gravity Rose - is the sum of her woes. But that was until she has to emergency ditch inside a star system which holds a full range of deadly secrets.

There are the murderous intentions of the local government with its slave-owning aristocracy to contend with, not to mention the ruthless rebels trying to overthrow the regime. And then there's the moon-sized unknown alien vessel that jumps into the system every few centuries, along with the chance to claim untold riches. Or the chance to die, well, really quite horribly.

With Calder, Zeno, Skrat, Polter and the chief still helping Lana, there's the smallest of chances the crew might survive. But as every spacer knows, it's not where you jump into hyperspace that counts. It's only ever where you end up!

Stephen Hunt is the creator of the much-loved 'Far-called' fantasy series (Gollancz/Hachette), as well as the 'Jackelian' series, published across the world via HarperCollins alongside their other fantasy authors, George R.R. Martin, J.R.R. Tolkien, Raymond E. Feist and C.S. Lewis.

‘Hunt's imagination is probably visible from space. He scatters concepts that other writers would mine for a trilogy like chocolate-bar wrappers.’
- TOM HOLT

‘All manner of bizarre and fantastical extravagance.’
- DAILY MAIL

‘Compulsive reading for all ages.’
- GUARDIAN

‘Studded with invention.’
-THE INDEPENDENT

‘To say this book is action packed is almost an understatement… a wonderful escapist yarn!’
- INTERZONE

‘An inventive, ambitious work, full of wonders and marvels.’
- THE TIMES

‘Hunt knows what his audience like and gives it to them with a sardonic wit and carefully developed tension.’
- TIME OUT

‘A ripping yarn … the story pounds along… constant inventiveness keeps the reader hooked… the finale is a cracking succession of cliffhangers and surprise comebacks. Great fun.’
- SFX MAGAZINE

‘Put on your seatbelts for a frenetic cat and mouse encounter... an exciting tale.’
- SF REVU

Stephen Hunt is a fantasy and science fiction author who lives in Spain and the UK. He is best known for his best-selling Jackelian fantasy series of novels from HarperCollins, also the publisher of J. R. R. Tolkien and C. S. Lewis in the UK.

The Jackelian world is a fantasy adventure set in a far-future Earth where the passage of time has erased almost all memory of our current world from history. Electricity is now unreliable and classed as a dark power, with many of the nations of the world existing at a Victorian level of development and relying on steam-power, mechanical nanotechnology and biotechnology to survive and prosper.

It is a world of strange creatures, flashing blades, steammen servants, airship battles and high adventure.

Each novel is written as a stand-alone work, but share the same world and many of the same characters who criss-cross between the novels (a technique shared with fellow British fantasy author Terry Pratchett and his Discworld series).

Stephen maintains his own web site over at www.StephenHunt.net and when he is not writing, he can be found indulging in such interests as cooking, gardening, collecting comic-books, and building his collections of genre novels.

You have subscribed to alerts for Stephen Hunt.

You have been added to Stephen Hunt's favorite list.

You can also sign-up to receive email notifications whenever Stephen Hunt releases a new book.