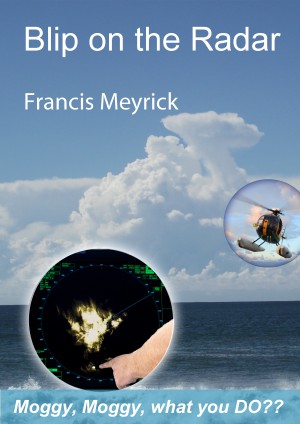 Blip on the Radar

By Francis Meyrick
Rated 5.00/5 based on 1 reviews
Mix one dreamy Irish helicopter pilot with a crew of Taiwanese, Chinese, Philippinos and Indonesians, and you get everything – from confusion, to fireworks, to hilarity. Flying in those remote Pacific areas, thousands of miles from Search and Rescue capability, ‘Moggy’ Meyrick was touched by our common humanity, and awed by Nature. This book is written for everybody, not just helicopter pilots. More
The Tuna Helicopter Industry is regarded by many as the Wild West of helicopter flying, and Francis ‘Moggy’ Meyrick describes his personal experiences as a pilot on board Taiwanese and Korean fishing vessels in the Pacific Ocean. This collection of short stories has it all – hilarity and tragedy, nail-biting near-disasters and some truly intense, borderline terrifying moments. He describes flying through a massive cloudburst, struggling to find his way back to the ship as he runs out of fuel. And he describes accidentally throwing smelly garbage onto Sacred Burned Offerings.
You will also find expressed, surprisingly perhaps to some, the author’s deep awe and respect for Nature, which he refers to as ‘All Our Mother’. He stridently calls for sustainable fishing practices, and warns about the danger of short-term exploitation. Above all else, his passionate love of tuna helicopter flying and his quiet compassion for his fellow Man and the Mystery of the Universe, shine forth.

Location:Texas, USA Naturalized US Citizen of Irish extract - Fixed Wing and Helo trucker.Interests: "The Absurdity of Man". I am a proud supporter of Blarney, Nonsense, and Hooey. I enjoy being a chopper jockey, and trying to figure the world, people and belief systems out. I'm just not very good at it, so it keeps me real busy. I scribble, blog, run this website, mess with rental houses, ride motorbikes, and read as much as I can. I went solo 44 years ago, and I like to say I'm gonna get me a real job one day. When I grow up. ("but not just yet, Lord, not just yet") For my aviation scribbles see www.chopperstories.com.... enjoy! I wish you Peace in your Life. May you always walk with the sun on your face, and a breeze ruffling your hair. And may you cherish a quiet wonder for our awesome Universe. Life isn't always good. But it is always fascinating. Never quit.

I came to 'Blip on the Radar' not as a pilot, but as an avid armchair traveller.
Francis Meyrick comes over as a caring, spiritual soul, who finds himself in the highly macho world of ocean tuna fishing. For him, it is all about the flying, and you sense that he is most happy with life when airborne.

The tough and dangerous world of tuna fishing seems a strange place for someone of a poetic and philosophical turn of mind, like him. How many tuna helicopter pilots would put their own safety at risk by throwing on their scuba diving gear and attempting to rescue drowning dolphins? This is done within a huge fishing net containing hundreds of tons of fish, and all a thousand miles offshore, while the ship is laboriously still hauling on the net.

But Meyrick has resourcefulness and not a little luck on his side. He is a survivor, despite the many perilous scrapes he gets into. Like his other book, 'Moggy's Tuna Manual', 'Blip on the Radar' contains vivid examples of how it can all go so very wrong so very quickly with helicopters. But, unlike 'Moggy's Tuna Manual', here we are taken more into the human side of the tuna fishing story.

When speaking of the risks of flying in the tuna fisheries, he says by way of offering advice, "Helicopter Flying is a thinking Man's game." If only to see why he says that, anyone considering flying a chopper would be well advised to read this book, along with 'Moggy's Tuna Manual'. And yet, even this very thinking man has had his own fair share of close encounters, truthfully narrated here, warts and all.

As a certified helicopter mechanic and pilot, Meyrick's concern for his helicopter’s survival, let alone for his own neck, shines through. He demonstrates such mechanical empathy for his aircraft that it is almost as if his chopper is a part of himself.

There is laughter here too. As when he innocently uses a high pressure fire-hose to flush a loo, with interesting results. Meyrick can laugh at himself. And he honestly reveals how his own naivety, or occasional lack of awareness of culture detail, sometimes gets him into trouble.

The tone of the book varies impressively, from the adrenaline inducing chapter 'Near Miss' to his 'The Pilot Who Hated Me' - the latter being told with particular sensitivity and compassion. In this way, we get the full spectrum of Meyrick's ability as a writer.

Poetic at times. Certainly thoughtful. With touches of philosophy. But never preachy.
This is a thinking person's read.

You have subscribed to alerts for Francis Meyrick.

You have been added to Francis Meyrick's favorite list.

You can also sign-up to receive email notifications whenever Francis Meyrick releases a new book.